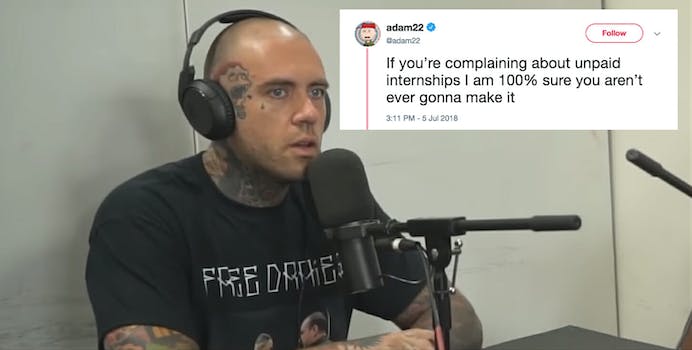 Twitter is destroying Adam Grandmaison over his comments on unpaid internships

If you work in a creative field, you’ve probably had an unpaid internship—or considered one—at some point in your career. Unfortunately, many opportunities to get a foot in the door expect young people to work for free. The idea is that you receive valuable training, experience, and connections instead of money to pay for somewhat necessary things like food and shelter. The companies, in return, get free labor. The U.S. Department of Labor has rules to determine whether or not an intern should be paid by a for-profit employer, including a “primary beneficiary test.” In other words, it’s still very easy for a company to exploit young creative people who need an internship to get ahead.

But YouTube personality and No Jumper podcast host Adam Grandmaison thinks that we shouldn’t complain about interns not getting paid for the work they do. In a series of tweets on Thursday, he unabashedly defended unpaid internships.

After saying that people who complain about not getting paid for an internship aren’t “ever gonna make it,” he went on to say that just having interns stresses him out. Sorry, dude. Don’t have interns then?

i don't even like having interns, it stresses me out having to tell people to do work for free, i would way rather pay someone and feel like i can really rely on them. but an internship is basically an audition and the opportunities are worth way more than $10 an hour

He ended the Twitter thread with the advice that “shockingly, if you want a really cool job, you might have to do it for free for a while,” which sounds like a line edited out of the first draft of the script for The Devil Wears Prada.

shockingly, if you want a really cool job, you might have to do it for free for a while.

The fact that Grandmaison calls his work a “business” shows that he makes a profit and should pay any interns he hires. But he apparently doesn’t agree; he tweeted that he thinks an internship “means we let you hang out and see how good you are/how ambitious you are for a while.”

probably true. i'm just speaking for my business but for me an internship basically means we let you hang out and see how good you are/how ambitious you are for a while. https://t.co/WNxRb0hBun

If you're complaining abt unpaid internships, maybe ur a 1st gen college student from a poor family whose college work study paid more an hr then your dad earned driving a bus, & tht struggle means you'll work your ass off more than any priv person who can AFFORD to work 4 free https://t.co/IGPBpgusRH

I made it. And I still think unpaid internships are trash. If you're tweeting in defense of them I assume you're too busy exploiting kids to do good work. https://t.co/p9OR4QbxvC

TIL I am never gunna make it. https://t.co/QObgyurSSd

Here’s the thing about all unpaid internships: the person taking the internship must find a secondary source of income. They must be independently wealthy, receive money from their parents, or take one or more part-time jobs on the side. Because it costs money to eat, pay rent, commute to an office, and simply exist in the world. Even with a part-time job, it’s still tough to do unpaid work for part of the week.

If you’re out here trying to defend unpaid internships in 2018, be prepared to face a wave of criticism. Also: Pay your interns.