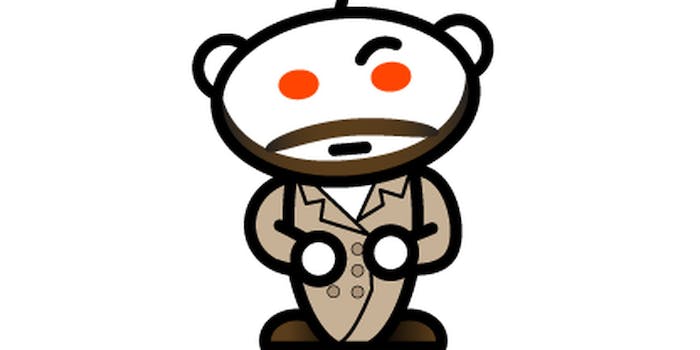 Scopolamina has become one of the most popular Reddit users ever through a steady stream of NSFW content.

Warning: This story contains links to content that is not appropriate for work.

In the wake of Gawker’s exposé on notorious troll violentacrez (VA)—a power user and top moderator behind some of the social news site’s scandalous sections—Scopolamina has emerged as the most prominent submitter of sexual images on Reddit.

Over the last five months, the anonymous user has manually submitted 30,000 posts—most, though not all, pornographic in nature—to much success. His links and comments have garnered 1.4 million karma points, Reddit’s standard unit of measurement for popular content, making him the second most-popular user on a site that accumulates more than 30 million unique visitors a month. In fact, the only individual who has more karma is MaxwellHill, who accrued 1.6 million karma points in a span of six years.

In that time, he has also become the moderator of 213 different subreddits, including roughly 15 percent of the site’s top 1000 “not safe for work” (NSFW) subcategories, scintillating forums like r/nsfw_gifs that offer exactly what you expect and, according to one description, “would probably get you fired” if viewed from your corporate cubicle.

DD: What, if any, relationship do you have with the Reddit administrators?

I have no relationship with the current admins. As many people have mentioned all over Reddit, the Admins are notoriously hard to get responses from although the new guy /u/Reostra has been very responsive to the couple messages I’ve sent him regarding the spam problem in the NSFW community. The most contact I have with them is through r/RedditRequest and r/ReportTheSpammers. I will say that there are a small number of admins who are attempting to perform an almost entirely thankless job so that has to be taken into consideration.

DD: In an Oct. 24 Jezebel article, “Samantha”—the redditor behind the Predditors Tumblr that exposed r/Creepshots—said that she had “found images of minors in almost every NSFW sub there is.” What’s your response to that allegation, given that you moderate a large portion of them?

I consider this statement to be insulting. There are no images like that on any of my subreddits. These types of allegations are tacit accusations of illegal activity being either performed or supported by myself and a group of other NSFW moderators who are extremely dedicated to eliminating this type of content from the site and reporting any bad actors.

I have an excellent track record of acting immediately on reported content, both in terms of dealing with illegal material being posted—which is quite rare—and with helping other redditors whose images have been shared without permission. With the latter, I assist them in getting those images taken down from the original host, which can be difficult for some people to handle without some help.

If Jezebel or “Samantha” would contact me, they’d find me not only extremely sympathetic to their cause, but also more than willing to help them with whatever they’re trying to accomplish. That said, given that they’re approaching the situation from a standpoint that everyone involved with the NSFW subreddits is the scum of the earth, it makes it much harder for me to reach out.

DD: Reddit is often characterized as being racist and/or sexist. Do you agree with these assessments?

It’s difficult to make definitive statements about “How Reddit thinks” because it’s simply too large of a population to make such wide-sweeping assumptions about how they think. That being said, I have encountered a lot of racist remarks when I post “women of color” content outside of subreddits devoted to them. I think that there are a lot of young, stupid males on the site who are still at an age where racist and/or sexist slurs are still considered funny. To borrow two popular Internet terms, they just need to GTFU (“grow the fuck up”) and STFU (“shut the fuck up”).

Regarding any accusations that my subreddits marginalize women, I would again say that idea is completely false. There are many women on Reddit who, for a variety of reasons, want to share images of themselves and they should be able to do so without fear of being harassed. Many of these women choose to participate on my subreddits, such as r/Curvy and r/TinyTits, because they provide a safe and welcoming atmosphere for those who tend not to get much appreciation or respect in places like r/GoneWild.That’s the atmosphere I’ve created in my communities.

DD: A lot of the subreddits you currently moderate were at one point created and/or managed by VA. What type of relationship did you have with him?

My relationship with him was always completely “professional”. He and PIMA, another user recently banned from Reddit, were two of the first community managers to approve me as a submitter and to invite me to start moderating. I consider them both friends, although we have no personal contact and I haven’t had any communication with VA since before the whole fiasco. It’s a strange reality that they are both gone now.

DD: You consider them friends despite the fact that your interactions with them were strictly through Reddit. Why is that?

VA created almost all of the most popular NSFW subreddits, had a huge part in helping the others grow, and was a huge influence in the NSFW community and Reddit as a whole. I never would have been able to be so successful so quickly without the years of work that he invested before I started.

The two were also very friendly and generous with me. It’s difficult to be a top redditor sometimes. I’ve gotten more than one message from angry redditors cursing at me or even telling me to kill myself simply for being a prolific contributor to the site. During those times, PIMA, VA, and YoureGonnaLoveMe (YGLM) were extremely helpful because they had similar experiences and were able to guide me through them. To be fair, I’ve gotten more messages thanking me for my contributions than the negative ones. But those mean messages do have an effect on you, and it was very helpful to have people who understood what I was going through. Both PIMA and VA are gone now and as weird as it sounds, the loss is palpable.

DD: It sounds like there’s not a lot of upside to doing what you do. Why still do it?

When I started, Reddit was just a fun game and I wanted to get a lot of points. Now that I’m number 2 on the leaderboard and I moderate so many subreddits, my interests have shifted to creating active and engaging communities. In short, moderators on Reddit treat their subreddits as little kingdoms. I simply want my kingdoms to have the most citizens, i.e. subscribers. These citizens are the ones who make communities worthwhile. Mods only give subtle direction and lead by example when necessary.

DD: Speaking of VA, what are your own views on what happened to him, and do you feel more vulnerable and susceptible to doxing—the releasing of private, personal information online—because of the subreddits you mod?

First of all, VA never posted anything illegal; he simply excelled in posting the most distasteful content on Reddit. If anyone had concrete evidence that illegal activity had taken place, that information should have been taken directly to law enforcement to be handled properly. That is not what happened. Adrian Chen and Gawker ruined a man’s life for simply posting material that others found distasteful.

Secondly, although I do not know the exact specifics of how Gawker got VA’s info, I feel confident in saying that he was hung with rope that he provided to his enemies. VA provided his personal information to various individuals around Reddit and attended meetups. He trusted that these people would not share that information with people who disagreed with him.

I do believe that those responsible for the outing of VA will feel that they have license to continue this type of behavior. Once you’ve destroyed one of the most influential Redditors around, what more do you have to fear? As a result, I deleted two long-standing accounts because they contained personal information that I no longer felt comfortable sharing. It also means that I cannot participate in my city’s subreddit, in Reddit Secret Santa, or any of the other exchanges, or especially attend any Reddit meetups in my city.

In short, I cannot participate in any of the things that I think made Reddit the best website in the world.