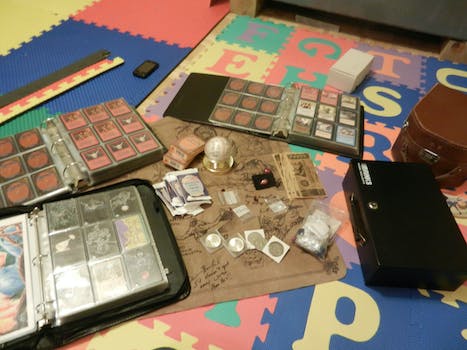 Redditor finds $32,000 worth of Magic cards in a hidden safe (UPDATE)

No, not that safe. Thanks to a few Magic: the Gathering–obsessed redditors, one man may be $32,000 richer than he thought.

Thanks to a few Magic: the Gathering–obsessed redditors, one man did not find Magic cards in a safe, he owned them already. It’s all an elaborate hoax.

On Tuesday, Reddit user Safeisbig “hired a locksmith” to crack open a safe (no, not that safe) he “discovered” in his house during some remodeling. What he “found” inside the 5-foot-by-4.5-foot metal box was a stockpile of the “best hidden Magic: the Gathering collections of all time,” redditor and Magic expert JubilationLee commented.

The collection included a binder full of cards, a signed baseball, old bank notes, and silver dollars. Safeisbig also posted a handful of videos on YouTube of him flipping through the binder of cards. This got JubilationLee even more excited.

“What you have in that binder would rival all but the largest retailers in the US as far as expensive older cards,” JubilationLee added. “I watched it a few more times and a conservative it’s-3-am-and-i’m-half-asleep estimate would be about $28,000-$32,000 (retail, you could probably get 70-80 percent for 3/4 of the cards in there).

“Please PLEASE be gentle with those cards. Not only is that a substantial amount of money, but that stuff just isn’t out there much anymore. You found history. A very meaningful binder of treasures. I’m not gonna lie, I thought about making you an offer on it of around $10k, but that would be a shitty thing to do. You deserve to upgrade your house, get a new car, whatever.”

Shortly after, redditor thekidd142 investigated and compiled a fairly convincing list of why Safeisbig’s find was all a hoax.

Then Safeisbig fessed up: “Oh this was not done for karma, it was done for entertainment,” he posted.

[I] may be married to the guy and love him to death, but yes, OP is a f****t. … hopefully this has gotten something out of his system and future f****try will be kept to a minimum.

Safeisbig’s find was the biggest to rock the r/WhatsInThisThing forum. In just four days, the subreddit has collected more than 73,000 readers. The group was created by New Zealand redditor dont_stop_me_smee after he discovered a large safe in his home. The safe has yet to be opened, but dont_stop_me_smee is working with four different locksmiths to crack it.