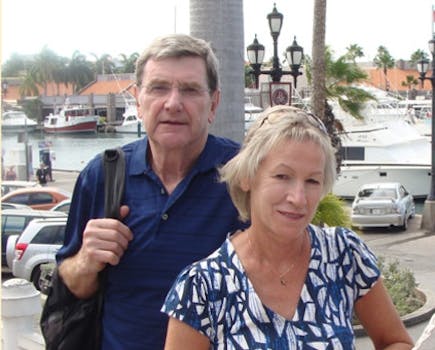 Fearing the worst, Richard Whalley went to Facebook for help finding his parents.

The days following the Boston Marathon bombing have brought out the best of the Internet, through temporary housing, donations, and more. Now the son of two victims has been reunited with his parents thanks to an effort by Facebook and Reddit.

Richard Whalley, a 25-year-old CEO, first discovered his parents were injured by the explosions after his older brother showed him a photograph of their father that had been circulating Reddit, the popular social news site.

The two tried calling hospitals to find out what had happened to their parents, Eric and Ann Whalley, but the hospitals didn’t have a record of them.

Fearing the worst, Whalley went to Facebook for help.

“This is my dad in the picture in this link,” Whalley wrote.

“I have no idea where my mum is. They were both bombed. I’m trying to find out what hospital they are at. can you help? Eric Whalley & Ann Whalley. They look pretty severely injured and I’m worried my Mum is dead.”

Whalley’s friends started calling different hospitals around Boston and some suggested using Google’s Person Finder. Just 10 minutes later, Whalley was able to find both of his parents located at two different hospitals; in the confusion and chaos following the explosions, Eric and Ann had been registered under the wrong names.

He updated his Facebook friends that he located his parents a day later.

Whalley told ABC News that his parents both have extensive injuries from the bombs. Eric may lose his sight after being hit in the skull and eye, while Ann has a mangled right foot and was hit in the legs. They were moved to the same ward so it would be easier for Whalley and his brother, Chris, to visit them.

The Whalleys still have a long road ahead of them. Eric and Ann need more surgery, and it’s estimated that between the hospital stay and extensive rehabilitation, the cost of treatment could go into the “millions.”

Even after they helped Whalley reunite with his parents, the Internet continued to lend a helping hand.

Whalley’s alma mater, MIT, set up a donation page on GiveForward to help pay for their medical expenses. Close to 1,000 people have already donated a total of over $48,000.

Any extra funds they receive will go to helping other victims’ families.

“I mean it’s been pretty surreal,” Whalley told ABC News. “But we’ve had a lot of support from the community. One of the messages of this story is these online tools are available to people to go and aid others in the recovery process. Getting help can sometimes be overwhelming.”