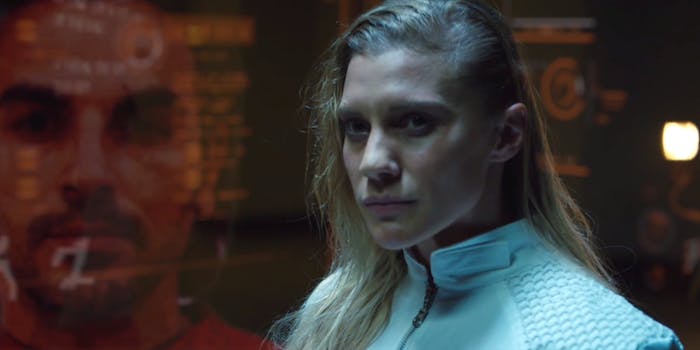 It'll keep you guessing until the very end.

The Power Rangers live-action movie doesn’t come out for another year, but a fan film from Joseph Kahn gives us a glimpse of what it could be like.

Kahn isn’t interested in actually making Power Rangers—and would even turn down expanding what he has created in his “deboot.” But his 14-minute Power Rangers fan film demonstrates just how dark and gritty the world with those colorful superhero outfits can get with Battlestar Galactica‘s Katee Sackhoff and James Van Der Beek at the forefront. Power/Ranger has been in the works since last summer, and we finally get to see the end result of Sackhoff’s secret project everyone thought was Captain Marvel.

There’s coke. There are gunshots. There’s a cheesy ’90s workout video. This has everything.

Rocky the Red Ranger has Kimberly the Pink Ranger in an interrogation room after he betrayed the Rangers and the Machine Empire won out. We know very little about this dystopian future, and what we find out is even more disconcerting. It’s so gritty and violent, the NSFW version got removed from Vimeo.

And think you’ve got it figured out? That’s not how it works.

Update 1:05pm CT, Feb. 25: Kahn is, perhaps unsurprisingly, in a legal battle with the rights holder over this project. See the full details here.

Update 12:34pm CT, Feb. 28: Deadline is reporting that late Friday, the fan film’s producer Adi Shankar and franchise’s rights holder Haim Saban reached an agreement. The film is now back on Vimeo and YouTube after being pulled.