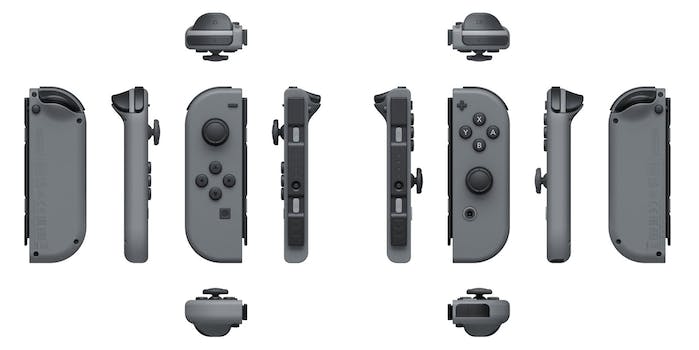 Here's how Nintendo plans to change the game.

Nintendo pulled back the curtain on its brand new console, the Switch, tonight, revealing details like the March 3 worldwide release date and $299 price. An extended demo was also given to the Joy Con controllers, and their various functionality.

The Switch itself features a capacitive touch screen, a first for Nintendo, rather than one that relies on pressure. Up to eight players can connect locally using Nintendo Switch systems as well.

But the real star of the show was the individual Joy Con controllers, that slide off the side of the system and can be shared with friends. Local multiplayer seemed to be a priority with this system, making use of motion controls.

Like the Wiimote, the Joy Con can be strapped to the user’s wrist, with a built-in accelerometer and gyroscope. The controllers have shoulder buttons used only when separated and a strap accessory will clip onto the controller for increased size and multiplayer gameplay. The capture button on the bottom of the left Joy Con allows users to capture an image during gameplay and share it online. Nintendo promises video capabilities will follow. To demonstrate, Nintendo showed off a few games making use of the motion controls.

1-2 Switch will launch aside the system and is made up of mini-games, like a cowboy duel demonstrated in the short trailer.

Get ready for 1-2 Switch this March. Challenge your opponent in this new face-to-face party game only on #NintendoSwitch. pic.twitter.com/pwUplLn4Ib

The other title showed off was Arms, a boxing-focused multiplayer game. It seems that this title borrows a lot from the Punch-Out series, and will be available this summer.

Introducing #ARMS, a mix of boxing and shooting where you use extendable arms to battle. pic.twitter.com/49xBTd9K2c