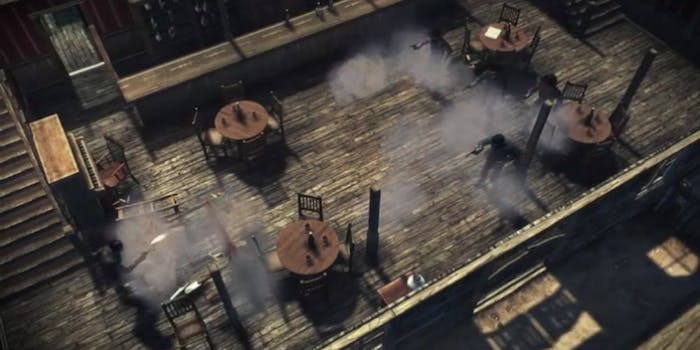 Be a saloon-wrecking gunfighter in ‘Hard West’

This new PlayWay Games title is rocketing toward full funding on Kickstarter.

If you’re tired of shooting people in fake-military games or science fiction romps, a new Wild West-themed title may be more your speed.

Hard West is described as “X-Com combat with Heroes of Might and Magic world map” on the Kickstarter page. Dropping the X-COM reference tells us a lot about the combat style: it will be turn-based, cover will be of paramount importance, and “unforgiving” would be an understatement. The Heroes of Might and Magic franchise also features turn-based combat, and allows players to move between locations and decide when and where to fight.

There have only been a relative handful of Wild West-themed video games released since The Oregon Trail in 1971, and only three franchises have made good use of the theme and achieved some popularity over the last decade. They span a healthy selection of genre types, none of which overlap what Hard West is going for.

The open-world, sandbox game Red Dead Redemption from Rockstar Games released in 2010 is considered one of the best games of the previous console generation. The game was set on the Western frontier of the United States in 1911, and was the second game in the Red Dead franchise, preceded by Red Dead Revolver in 2004.

The Call of Juarez first-person shooter franchise set in the Wild West encompasses three games released between 2006 and 2013, which were generally well received. Lead and Gold: Gangs of the Wild West is a class-based, cooperative third-person shooter released in 2010 that also received good reviews.

As of the time of publication, the Kickstarter for Hard West had raised more than $27,000 and was rocketing toward its $70,000 goal. The Kickstarter ends on Sept. 6.