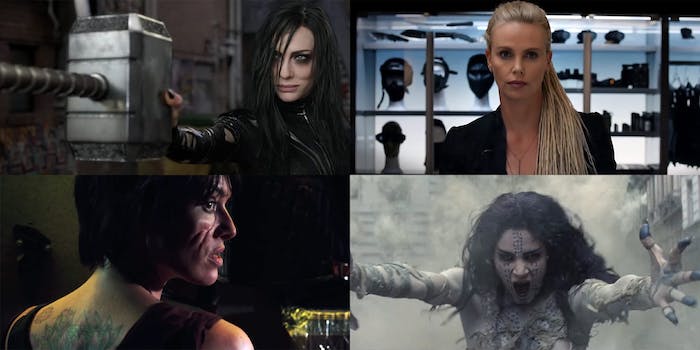 A look at female villains in film since 2007. (Spoiler: There aren't many.)

First discovered by MoviePilot last week, the revelation comes from screenwriter Terry Rossio. In a longer blog post about screenwriting, Rossio claimed that his version of Dead Men Tell No Tales originally had a female villain but his script was nixed.

Why? Johnny Depp had previously appeared in a movie featuring a female villain and he thought he would be repeating himself. (The main villain in the finished film, Captain Salazar, is being played by Javier Bardem.)

Of course there is also the possibility that all those screenplays simply sucked. But usually when I go back to read a screenplay that wasn’t produced, it holds up, often better than the film that was eventually produced. Sometimes it just takes a single decision by a single person, often just a whim, to destroy years of story creation and world-building.

In the post, Rossio—who is an executive producer and given a story credit on Dead Men Tell No Tales—acknowledged that other factors might’ve been involved. But it’s not a particularly good look for the film or Depp, who has faced increasing backlash for his on-set behavior and a lawsuit from his ex-manager. There is also the lingering accusation that Depp allegedly abused his ex-wife Amber Heard, which has led some fans to bring it back up anytime Depp gets cast in something new or attempts to repair his image.

But the move from Depp to nix a female villain—because one appeared in a film of his that flopped, mind you—once again highlights just how few female villains are in blockbuster movies. If Depp was worried about retreading ground, maybe Jack Sparrow should face someone other than a vengeful (and undead) pirate, the main villain of multiple Pirates films.

How few are there? We looked back at some of the most financially successful movies of the last 10 years to see how many there were in major blockbusters. The criteria was simple: If she was the main villain of the film, she got on the list.

We didn’t include secondary villains or henchmen that feature in films like Kingsman: The Secret Service or Guardians of the Galaxy Vol. 2. If the villain had a presence as the big bad (e.g. Order of the Phoenix’s Dolores Umbridge), we put her on the list. Animated films and films whose villains only use their voices are denoted with an asterisk. Female villains that were one part of a team or organization such as The Twilight Saga‘s Volturi were kept off the list.

And the result? While 2017 has some promising villains in The Mummy and Thor: Ragnarok, it’s still a very small list.

3) Horton Hears a Who! (Carol Burnett as Sour Kangaroo)*

1) Coraline (Teri Hatcher as Other Mother)*

1) Alice in Wonderland (Helena Bonham Carter as the Red Queen)

2) Snow White and the Huntsman (Charlize Theron as Queen Ravenna)

1) Oz the Great and Powerful (Rachel Weisz as Evanora)

1) The Fate of the Furious (Charlize Theron as Cipher)

2) The Mummy (Sofia Boutella as Princess Ahmanet / the Mummy)