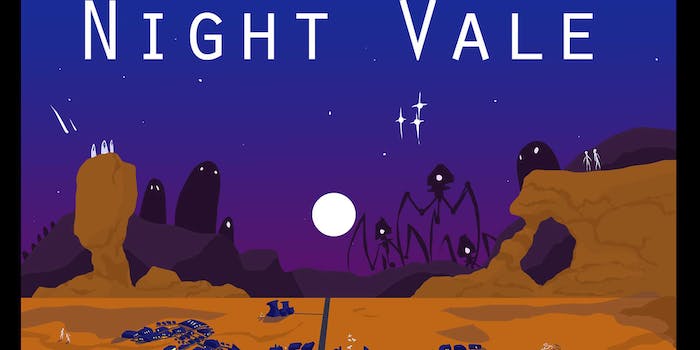 In the surreal shadows of “Night Vale,” a new fandom lurks

The bizarre podcast has found a surprising, supportive, and creative audience on Tumblr.

“Welcome to Night Vale. A small desert community where the sun is hot, the moon is beautiful, and strange lights pass overhead while we all pretend to sleep.”

Over the past few weeks, the popularity of surreal podcast Welcome To Night Vale has skyrocketed. Two months ago, it had a small but loyal fanbase who mostly heard about it via word of mouth or through the podcast’s gloriously weird Twitter feed. Now, it’s the most popular podcast on iTunes, above TEDtalks and NPR. And a lot of those new listeners have come from an unexpected source: Tumblr fandom.

Providing twice-monthly news reports from fictional small-town America, it’s not immediately apparent how Night Vale conquered Tumblr. After all, it doesn’t have much in common with the adventure stories of Harry Potter, Teen Wolf, or Doctor Who. It’s not even produced in a visual medium, so fans can’t post the screencaps and GIFs that keep most Tumblr-based fandoms ticking along.

The only possible explanation is: It’s just that good. 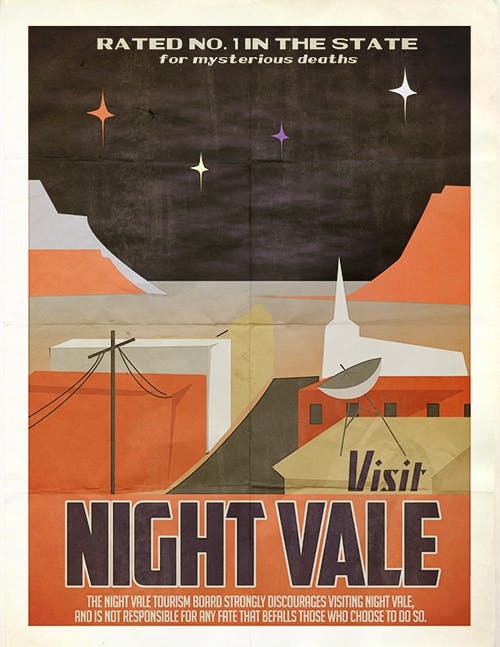 Although each episode follows the same formula (20 to 30 minutes of horrifying “news” from Night Vale, interrupted by a musical interlude described as “the weather”), Welcome to Night Vale is utterly unpredictable.

In one episode, Cecil, the radio host, launches the mayoral campaign of Hiram McDaniels, a charming insurance fraudster who also happens to be a five-headed dragon. Oh, and half the population was replaced by buzzing, human-shaped voids in the air.

The only real ongoing plotline is Cecil’s relationship with Carlos, a scientist who moved into town at the beginning of the series.

Oh, Carlos. Beautiful Carlos. Carlos, with his perfect hair and “teeth like a row of military tombstones”. (Cecil has a certain way with words.) 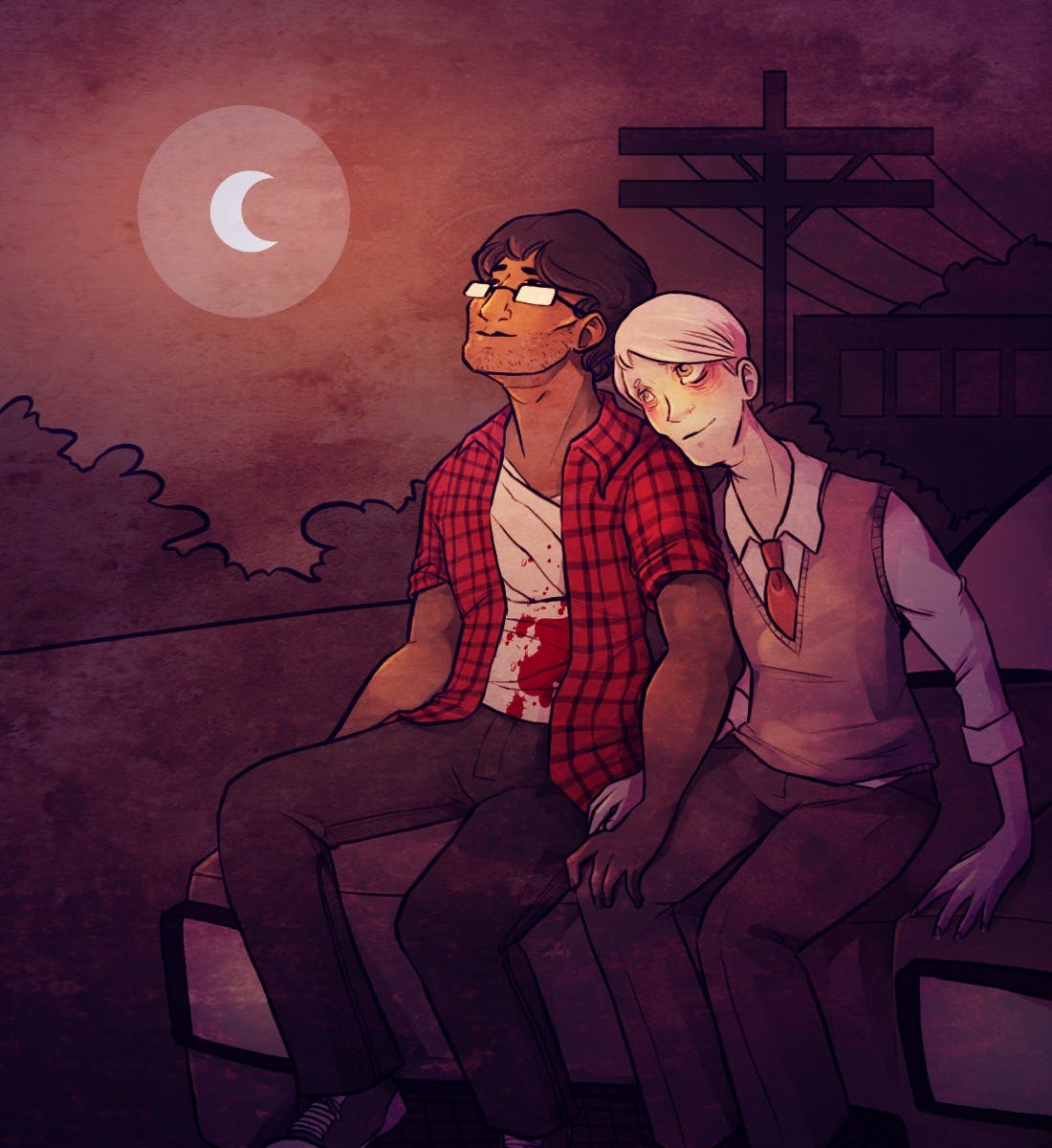 You’d be forgiven if you didn’t realise that Cecil had a crush on Carlos for a few episodes. Although Carlos makes his first appearance in the pilot episode (complete with Cecil’s constant descriptions of his “perfect, beautiful hair), Cecil’s obsession with him just seems like another weird little detail of Night Vale, but no. Cecil definitely has a crush on Carlos, and it’s totally adorable. In fact, after 27 episodes of Cecil waxing poetic about Carlos’ beautiful hair (and then bemoaning its loss when Carlos gets a haircut), they just went on their first date.

I’VE NEVER EVEN SEEN THIS FICTIONAL PERFECT HAIR AND I’M STILL UPSET THAT IT WAS CUT.

Somehow, their slow-moving, 1950s-style courtship seems to gel perfectly with the format of the show, as Cecil combines calm, NPR-style broadcasts about time travel and the death of his latest intern with excited, gushing editorials about Carlos’ bravery and handsomeness. As Cecil earnestly asks his listeners whether they think Carlos likes him, it’s impossible not to get invested. And when fandom gets invested, it gets creative.

Here’s a brief overview of fanworks inspired by Welcome to Night Vale.

Of the 120 or so Night Vale fanfics on Archive of our Own, around 90 pair Cecil and Carlos in a relationship. And the thing is, fandom seems to understand that this pairing can’t really be written as a typical romance. Carlos and Cecil might go on a date to the local diner, but it’s also probably going to involve tentacles, blood-letting, a trans-dimensional portal, or some kind of Lovecraftian ritual. Never mind the fact that everything in Night Vale is constantly surveilled by the Sheriff’s Secret Police, a mysterious cabal of “hooded figures,” and a selection of vague yet menacing government agencies.

But if you want to read about something other than Cecil/Carlos, don’t worry. There’s a prompt meme where you can request stories from other writers, and so far the suggestions are pretty varied. As in, there’s already a story where Cecil is an immortal, Neil Gaiman-esque avatar for the town of Night Vale itself, and another prompt where Mayor Pamela Winchell is the high school sweetheart of “the faceless old woman who lives in your house”. (Oh yeah, according to a recent episode, there’s a faceless old woman living in your house. Try not to think about it.)

The podcast itself may not be a visual medium, but fandom has been doing its best to remedy this by producing as much art to accompany it as possible. There’s even been some cosplay and a YouTube trailer using footage cobbled together from other sources. 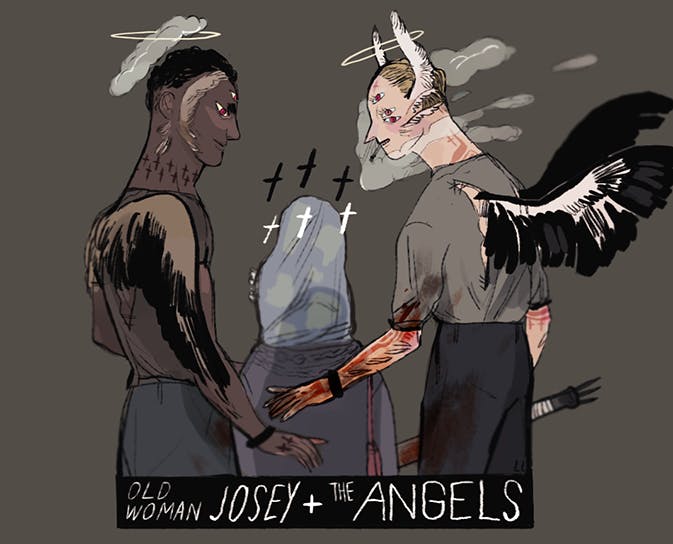 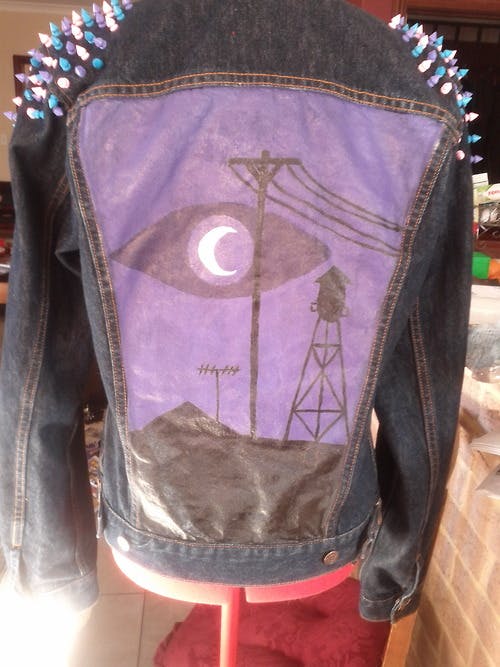 Much of Welcome to Night Vale’s surreal charm comes from Cecil’s imperturbable speaking voice. As a Night Vale native, he’s completely unfazed by things like children being kidnapped by the Sheriff’s Secret Police, or a giant, whispering forest suddenly appearing just outside of town. He just continues to read out those official announcements from Night Vale City Council, most of which are subtly disturbing. As a result, Night Vale fandom tends to go for a lot of 1950s-style PSAs and propaganda posters.

But probably the most interesting aspect of Night Vale fanart is the fact that fandom’s hivemind has managed to create a semi-coherent canon of what many of the main characters look like—despite the fact that there are barely any physical descriptions of anyone in the show.

For example, Cecil has been drawn as a variety of different races (and species), but the general consensus is that he’s blond, kind of dweeby-looking, and wears button-down shirts and sweater vests. And he is often drawn as having a third eye and strange tattoos that move across his arms and neck. Carlos generally looks confused but cute, has longish hair, and wears a lab coat.

“Well, obviously. Folks in Night Vale stopped using actual cassette tapes in the Eighties, Carlos. So old fashioned. Here, let me show you.” Cecil places his hands over Carlos’s, and presses down, cracking the egg. Instantly, the air is full of song. Carlos laughs.

Thanks to being one of the first all-audio fandoms of the Internet age (or maybe due to the rise of 8tracks), Night Vale has inspired a lot of fanmixes—in other words, mixtapes about a particular show or set of characters. And they are really good. Here’s just one recent example:

Night Vale began to grow in popularity around the same time as Hannibal’s first season was drawing to a close, and there’s a lot of overlap between the two fandoms. When you consider their shared love of disturbing humor and a high body counts, that’s not really surprising. Rather than using fanfic (which would be kind of tricky, since Night Vale is a world unto itself), the favored crossover method is quoting @NightValeRadio tweets to annotate screencaps from Hannibal. They fit together worryingly well. 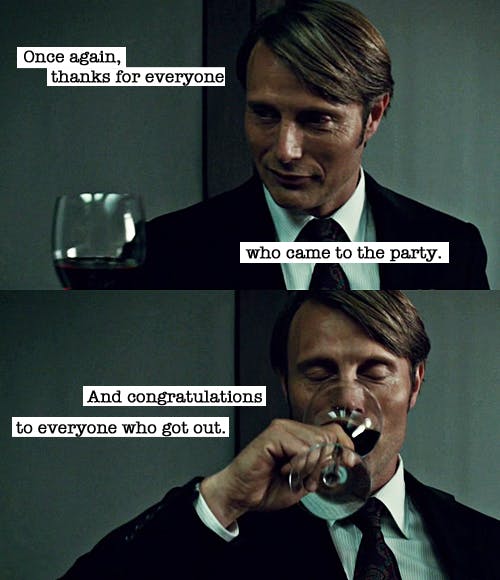 So if someone on your Tumblr dash suddenly starts reblogging hundreds of photos of mysterious hooded figures, or playlists of white noise and the sound of wind in the trees, or warning messages about spider attacks… don’t worry. It’s just Night Vale fandom.

And if you’re faint of heart, take some advice from Night Vale city council’s infamous PSA: “If you see something, say nothing. And drink to forget.”