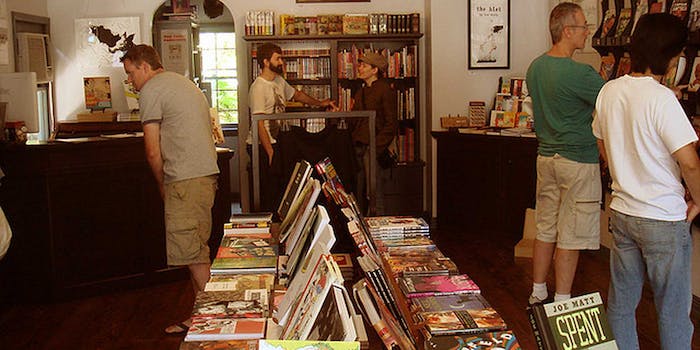 For every story you hear about an inclusive convention experience, there’s a depressing case of sexual harassment lurking around the corner.

In the comic fan community, discrimination is far from over. Sometimes it seems like for every story you hear about an inclusive convention experience, there’s a depressing case of sexual harassment lurking just around the corner.

Comic book fans come in all shapes and sizes, but the stereotype is still a nerdy white guy. Often, comic stores seem to cater exclusively to that demographic, which can be divisive and off-putting to everyone else. If you’re a female fan, chances are you’ve already been accused of being a “fake geek girl” at some point.

Thankfully, Tumblr blog Hater Free Wednesdays is here to remind us that it’s not all bad.

“Comic shops are notoriously hit and miss when it comes to being inclusive of women, LGBT, PoC [people of color], and other minority comics fans,” reads the Hater Free Wednesdays manifesto. “This tumblr is for you to share your positive or negative comic shop experiences, so that fellow comics fans can find friendly local comic shops, and be warned of which shops to avoid.”

Here’s the master list of recommendations, and here’s a map of safe and unsafe spaces.

The idea began with author and comics fan Sam Starbuck. When one of his readers mentioned that they’d been put off by the sexism they encountered in comic shops, Starbuck asked for people to recommend “safe” comic stores. In the end he received so many replies that current Hater Free Wednesdays moderator Rebecca suggested setting up the Tumblr account.

“People have responded incredibly enthusiastically,” Rebecca told the Daily Dot. “We’ve had recommendations from across the United States and around the world; comic shop owners, employees, customers, as well as creators like Gail Simone, Kelly Sue Deconnick, and Greg Rucka, have all helped promote and encourage the project.”

“I feel like Hater Free Wednesdays is part of a larger movement towards shouting back that’s been growing in recent years,” Rebecca adds, linking HFW to projects like Everyday Sexism, Racebending.com, and Anita Sarkeesian’s Feminist Frequency.

Go to the HFW Tumblr now, and there’s a map of safe and unsafe comic stores, from Jay & Silent Bob’s Secret Stash in New Jersey (homophobia and mockery from the guys behind the counter), to Dragon’s Lair Comics in Texas (diverse and welcoming).

At the moment it may just be a useful resource for fans, but the hope is that eventually, stores will actively strive for that “safe” listing. Being labeled as creepy or inaccessible can hardly be good for business.