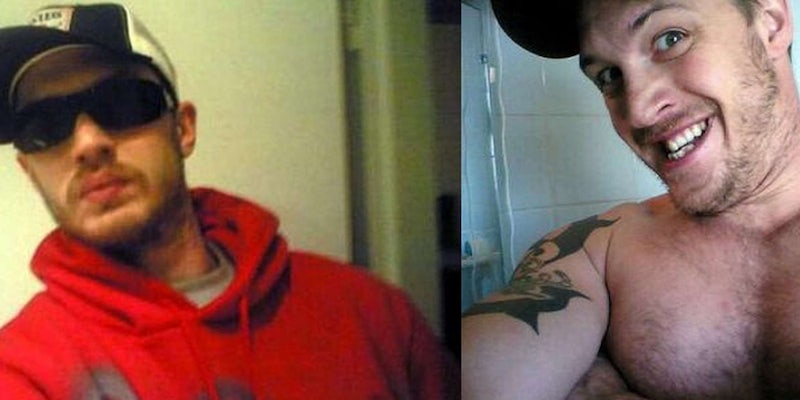 Hallelujah, the day he swore would never come has come at last. Tom Hardy has a Twitter.

UPDATE: Like a whisper on your skin, like wind through trembling leaves, Tom Hardy is now gone from Twitter. R.I.P., @TommyHardy77. Here’s the legacy he left behind:

Hallelujah, the day he swore would never come has come at last. Tom Hardy has a Twitter, and it’s as glorious as we always knew it would be.

Quick, follow him before he gets bored and takes his list of “absolute fkn legends” out of your life, leaving you a tragically unfulfilled wreck with no Tom Hardy Twitter account in your life.

He’s known for his dynamic physical changes and his ability to play characters ranging from vicious heavies like Bane and Charles Bronson to wry charmers like Inception‘s Eames. But If you’ve ever paid attention to the rising superstar off the big screen, you know that the comparisons to Marlon Brando come from more than Hardy’s pretty face and his physical transformations. Hardy, who once called himself “intrinsically feminine,” is as likely to gush about shoes as he is about French film. He has a brain that seems to whiz too fast for reporters to keep up with. He’s been called “one of the great conversationalists” because of his tendency to make rapid philosophical leaps, pull intelligent cultural references from random corners of his brain, and drop literary quotes into his anecdotes.

Oh, and the London-born actor once wanted to become a rapper, stole a car when he was a teenager, and has said in the past that if he hadn’t become an actor, he probably would have done quite well in prison.

In short, he’s the perfect Twitter celebrity who’s never been on Twitter—until now.

On June 4, @TommyHardy77 showed up on Twitter and began quietly following all his “mates” as well as, apparently, anyone and everyone on Twitter: from Al Jazeera to fellow Nolan actor Joseph Gordon-Levitt to Donald Trump to National Geographic. He also began interacting with the aforementioned mates, including British rapper Peter Meads, a.k.a. Scroobius Pip.

This was Tom Hardy’s second tweet ever. What does it mean? Do we know? Do we care?

This is heaven. We’re in Twitter heaven and its name is TommyHardy77.

Hardy stayed mostly on the down low until yesterday, when he started tweeting a long list of “legends,” a wide-ranging litany encompassing everyone from the Wu-Tang Clan to “Charlie B’s mum” (a reference to famous prisoner Charles Bronson, whom Hardy immortalized on screen) to the Iranian Embassy Siege.

And then came the wolves. Does he mean actual wolves or the U.K. soccer team? Do we even care as long as he keeps tweeting?

We’re not totally certain the account is actually Hardy, mainly because:

But we’re pretty sure this is the real deal. If it’s not, then it’s an account being run by a very good impersonator, or at least a dedicated Hardy stan (fanspeak for a stalker fan). Like the real Tom Hardy, the account is very civic-minded, and is obsessively following all Tom Hardy’s favorite charities and local London faves, including FLACK, the Cambridge homeless shelter for which Hardy has fundraised extensively, and Blag, a magazine with a close relationship to Hardy.

It also combines the unselfconscious rawness and easy navel-gazing of Tom Hardy’s previous experience on social media—on his notorious Myspace, where he posted honestly about the difficulty of playing to Hollywood’s rigid gender stereotypes, and shared infamous selfies that he later, tragically, deleted. Perhaps his agent told him that things like this were bad for his career. 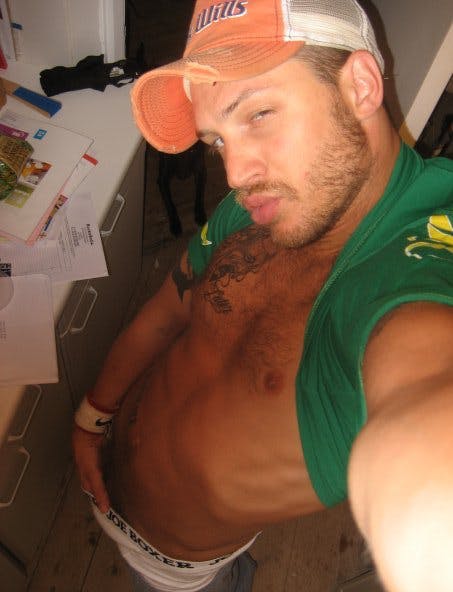 If so, his agent was so, so wrong.

In addition to Scroobius Pip, the account has been endorsed as real by Nicola Patton, webmistress of TomHardy.org.  So far the growing number of Hardy followers have been surprisingly respectful, but despite the obvious fan reverence, Hardy’s skittishness is starting to show.

Hardy recently told Blag in an interview that social networking platforms, while useful for branding, were “just ways of procuring the ego.” He described Twitter’s tendency to encourage celebrity whoring as “dangerous” and “very sketchy.”

But he also seems to be abjuring the urge to talk about—or draw any attention to—himself in any way. “Some legends show potential then they just fall off into not legend,” he stated last night. Considering that his own legend list includes his mum and dad, we’re pretty sure he’s just here to share the love on Twitter, not throw shade or talk himself up.

And however short-lived Hardy’s Twitter run may be, so far we’re enjoying every minute.