Life is often a rollercoaster of drama for fans of Supernatural, the CW’s popular, cliffhanger-heavy flagship series about two brothers and an angel fighting to protect the world against demons.

But in Supernatural fandom, where the interest of fans and the interests of the creative team often conflict, the drama often lives offscreen—as one Warner Bros. executive learned after this week’s episode.

“This will not end well,” tweeted WB executive Chad Kennedy on Tuesday night, shortly before deleting his Twitter. He was right. This week’s episode thumbed its nose at Supernatural fandom’s most controversial subject: Destiel—the unrealized queer romance of Dean Winchester and the angel Castiel—and the show’s lack of queer representation.

Heading into Supernatural’s ninth season, the show has had only five gay characters—all of them minor except for a brief recurring role played by Felicia Day. Queer representation is a major subject in Supernatural fandom, which has a huge contingent of slash shippers and queer viewers. Many people believe that main character Dean Winchester is bisexual, an idea that has created considerable controversy in later seasons.

Kennedy didn’t know any of that on Tuesday night when he commented that Destiel would probably never happen on the show. 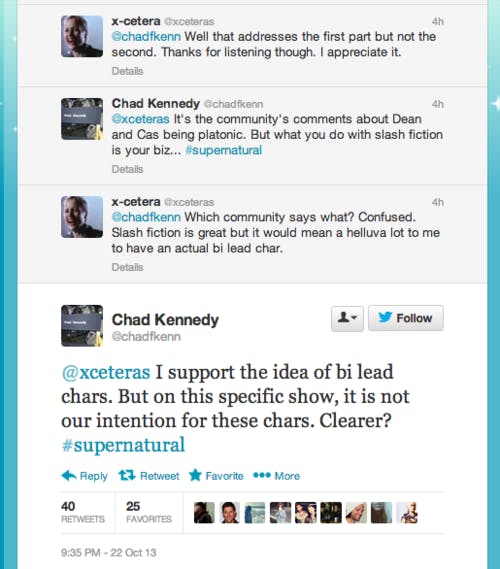 “[I]f it served the story, I would support it,” he added, noting that in general he supports the addition of queer and bisexual characters to narratives—but stating that Destiel had “never been pitched” to him as a story arc. This left many fans to wonder what narrative they’d been consuming all this while.

@bethanyj426 @OsricChau We feel lead on. We asked many, many times before to be told if there was no bi Dean or canon Dean/Cas in the cards.

And many fans saw the “serve the story” narrative as a cop-out on a night when Castiel had just been shown having a one-off sexual encounter with a girl that did nothing to further the plot. Additionally, numerous fans argued that Destiel would serve the story, especially given the number of romantic tropes that the show has arguably already applied to their relationship. And regardless of their investment in Destiel as a romance, fans questioned why the show couldn’t have at least given Castiel, who is a genderless, sexless angel currently inhabiting a human male form, the opportunity to have a queer sexual experience.

Though Kennedy is not a writer, he has executive decision-making power, which made many fans feel disrespected. His comments remained positive, but shortly before deleting his account, he tweeted, “Damon Lindelof was right,” referring to the Star Trek: Into Darkness writer who deleted his Twitter account after his dismissal of fan complaints about the film’s sexism led to backlash online.

After many fans lined up to accuse the angry fans of bullying Kennedy offline, spnantibullying noted that simply receiving a large volume of opinions about a subject does not constitute bullying or harassment.

But Destiel has always been a dark horse given Supernatural’s depiction of its three main male characters as emphatically straight. While few would deny that the show’s emphasis on male bonding and figurative brotherhood is full of homoerotic undertones, there’s no reason to believe that in its last seasons, the CW’s most popular show will stop being anything but relentlessly heterosexual. The logic of those frustrated with the fans who tweeted at Kennedy is simple: Why waste time arguing about it when it’s never going to happen?

But many Destiel shippers, despite the long odds, have grown increasingly convinced that their ship has been a long-planned and intended queering of two of the show’s three main characters. Just last week, those fans thought they’d achieved validation, with the disclosure that Dean Winchester had originally been scripted to tell the angel Castiel, “I love you,” in a crucial episode from last season. And given the popularity of the theory that Dean is queer, why wouldn’t it happen?

Kennedy’s tweets seemed to put paid to all of that passion—there are over 15,000 Destiel fanfics at the Archive of Our Own alone. Fans felt he’d dismissed a tremendously popular pairing along with years of devoted shipping and a community full of hope for what Season 9 could bring.

Instead, fans got a long and hopeful statement from actor Osric Chau noting to Destiel shippers that “anything is possible.” But Chau’s attempts were undermined when he joked about Castiel being bisexual, and when guest director Guy Norman Bee jumped in with an air of bafflement at the whole incident.

Perhaps the core issue in this Twitter debate was the lack of understanding the production team seemed to have about the viewpoint of the fandom. Kennedy stated that he’d only recently learned what Destiel was, and had no idea it was so big; Bee asked, “what’s a ship?” at one point while trying to figure out what he’d said wrong.

“Part of the problem is that this is not a Destiel issue,” noted helloiamfine on Tumblr after Bee’s comments made the rounds yesterday:

People are making Destiel and queer characterization for Dean a synonymous issue, and they’re not. If the complaints focused on the real life issue of queer representation rather than ship loyalty, it’d be a lot easier to emphasize how monstrously in the wrong these writers are in their current commentary and engagement of fans.

But luciferkingofspookiness seemed to sum up the ideas most Destiel shippers had on the subject, when she vented, “I’m so sick of being put down by tweets from people who work on the show… I’m the damn audience. And I’ll ship my damn ship.”.

But if that’s the attitude Destiel shippers take, it’s a far cry from having the endorsement and respect of the Supernatural production team.

For now, at least, it seems the show queer fans and slash fans have supported for nearly a decade has little interest in returning the favor.

Update: Kennedy has returned to Twitter using the display name “Scared Panda,” and tweeted that he “needed a day” off from the Destiel controversy.