What started as a strange text post on Tumblr has turned into an entire fandom.

You’ve probably heard that every year, the average person swallows six (or three, or eight) spiders while they’re asleep. The statistic is completely invented, not to mention impossible to prove under lab conditions. However, at some point after this old urban legend went viral on chain emails and “little-known facts” lists, the Internet found its own explanation for all those accidentally swallowed arachnids: Spiders Georg.

For whatever reason, the idea of Spiders Georg began to spread. Over 90,000 Tumblr notes later, he’s taken hold like a kind of Weird Internet remora, following in the wake of the bigger but significantly less interesting spider-swallowing “fact” meme. People dream about him. They’ve run the math on just how many spiders Georg would have to eat to make the statistic accurate. Spiders Georg is even reportedly interfering in people’s sex lives. As for the writer of the original text post, he’s pretty baffled by the whole thing, to say the least. Sometimes it’s difficult to come to terms with accidentally creating a masterpiece.

if yr wondering if my spiders georg post, beloved of teens worldwide, now has its own facebook page i did not create: https://t.co/gfUORwOLTV

this spiders georg bullshit gets worse everytime i check to see if its got worse https://t.co/0njuz3k5xV

The fact that some people have decided that Spiders Georg lives in Night Vale is telling. The idea of some old dude sitting in a cave all day, eating enough spiders to recreate a ridiculous, made-up meme statistic, is exactly the kind of weird joke that made the podcast Welcome to Night Vale one of the most popular fandoms on Tumblr. Perhaps inevitably, this has led to people writing fanfiction theories of what Georg does in his everyday life. For example, one claimed “he mixes spiders with honey on special occasions, like when the first edible mushroom of spring appears.” 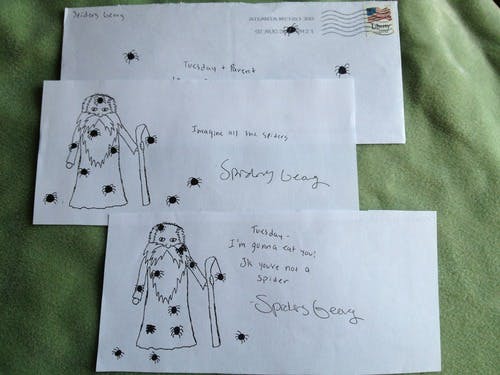 Reblog by reblog, the Spiders Georg mythos is developing from silly text post to fully fledged character, to the extent that there’s even a blog where someone is roleplaying as Spiders Georg. If you ask nicely, they’ll send you an autographed piece of Spiders Georg fanart.

And they have a perfect explanation for the whole Spiders Georg phenomenon. When asked, “do you not think it strange that you’re roleplaying someone else’s text post?” they answered: “look around you, the whole fucking world is strange.”