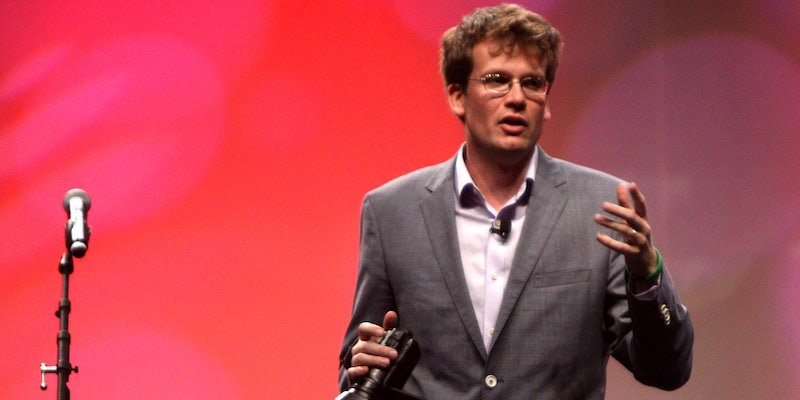 Is that John Green on the NYT bestseller list? Yes, along with a crop of "realistic" Young Adult fiction that some think is just a way of marginalizing women from the field.

Editor’s note: By including a sensational Tumblr rant that called to “end John Green,” the value of the serious discussion surrounding Green and his influence on YA publishing has been significantly diminished. It’s been removed. This story has also been updated with insight Green and other YA writers provided on Twitter.

Is John Green the Nicholas Sparks of Young Adult literature—a man whose success in his chosen publishing field overshadows the work of legions of his female counterparts?

More and more, women in the book blogosphere are arguing: Yes, and it’s hurting the genre.

Book blogger and librarian Kelly Jensen has been arguing for months that Green’s outsized influence on YA and New York Times bestseller lists is reductive and pernicious:

Let there be no question: Green has earned his accolades and awards. He’s worked tirelessly to gain a following and fan base. But the fact that we as a reading and book culture—hell I’d even go further to say those who are casual readers—continue to uphold him as some Savior of YA and the success toward which to aspire is amazingly problematic. Because it follows in the same problematic gender norms that have plagued us since forever. The cis-gendered white male is the standard for best.

@catagator I just feel like wouldn’t it be great if female YA writers could become successful without a JG endorsement?

Green is about as beloved—and as involved—as you can possibly be in the world of publishing. His works straddle and unite the worlds of YA publishing, YouTube, Tumblr, and fandom. He has a highly anticipated film on the way for his biggest success, the tearjerker The Fault in Our Stars. His string of bestselling literary YA novels have won numerous critical accolades. He enjoys an entire fandom of his own, the “Nerdfighters” movement, which encompasses both fans of his writing and of his Vlogbrothers video project with his brother Hank Green. Heck, he even has his own Tumblr meme.

But more importantly, Green’s novels, which provide poignant and moving glimpses into the turbulence of teens coming of age in a complicated world, have catalyzed the rise of “literary YA.” Writing for Time, fantasy author Lev Grossman named Stars the best book published in 2012, stating, “If you’re wondering why sales of young-adult books are up, even with all the challenges the publishing industry is facing, it’s because of novels like this one.”

The problem is that “novels like this one” is both a nebulous category and a dangerous one. Last year, in a mostly limp crop of new releases, Rainbow Rowell’s breakout success Eleanor & Park was scrutinized as getting what has since become known as “the John Green bump” after Green gave it a heartfelt, glowing review in the New York Times. Two months’ later, the Times’ Sunday Book Review gushed about the advent of “GreenLit,” which it declared was a new and revitalizing infusion that was elevating the YA genre. Curiously, the requirements for “GreenLit”—a snarky, wry protagonist having conflict with defective authority figures in a first-person point of view—are utterly normal staples of non-fantasy YA fiction. But, quoth the Times, it might be enough to “secure… a seat at [Green’s] round table.”

The Times has stuck by that dictum; recently its bestseller lists have been filled with men writing “realistic” YA, and the women of the book blogosphere are none too happy about it. This week the debate reached a boil after the Times’ listed, respectively, two women, three women, and three women on their top 10 lists for February. And two of the four women who show up have direct ties to Green. One is Rowell, and one is a biography of Esther Earl, the girl in Green’s life who inspired The Fault in Our Stars.

Before John Green, his general category of realistic (non-fantasy) YA was rife with teen angst and “issues” fiction that you might have associated with the legendary Judy Blume, or with newer writers like Sarah Dessen or Laurie Halse Anderson. Anderson’s classic 1999 novel Speak, about a high schooler struggling to deal with the aftermath of sexual assault, was so influential that three years later Penguin launched an entire imprint named after it. One of the books launched under the behest of Speak was Green’s Looking for Alaska. But it’s Green whose name you’re more likely to know today, not Anderson’s, although Anderson has won more awards and written more books.

On Twitter, Green has 2 million followers. Compared to the rest of the leaders in Young Adult fiction, that number is staggering. To approach even half the Twitter influence of John Green all by himself, you need an entire army of YA women. Anderson, Blume, Dessen, Veronica Roth, Cassandra Clare, Richelle Mead, Margaret Stohl, Kami Garcia, Rainbow Rowell, Maureen Johnson, Malinda Lo, Holly Black, LJ Smith, Ellen Hopkins, Shannon Hale, Lauren Myracle, Libba Bray, Melissa Marr, and Leigh Bardugo: As a group these women only have about 1.2 million followers on Twitter. That’s the voice of one man outweighing several decades of women who have had major successes, critical acclaim, and cultural influence.

The problem of the cultural influence his books have created is not Green’s fault, but it’s created a frustrating situation for female writers and readers. Book blogger Rhiannon K. Thomas issued a sweeping takedown of the way the NYT bestseller list is stacked against female authors, many of whom write series, which are automatically moved to the “Children’s Series” list, out of the YA category altogether. She also pointed out that when men like Green aren’t writing YA, the media perception of it suddenly changes. Instead of being high literature, it suddenly becomes a shallow, frivolous genre that only silly teenagers and unfulfilled housewives participate in—just like the romance genre sans Sparks.

Green is more than aware of the arguments surrounding his novels, and he’s aware of the complications they create for women. Wednesday night, in what was ostensibly a rant on Twitter and Tumblr about the unfair treatment given to the Twilight series, Green may have obliquely commented on the controversy over his own writing:

My concern is that popular work by women receives far more vitriolic criticism from the public (like, in terms of number of demeaning jokes…) than popular work created by men… Also, I would like to see equal attention given to the sexism in popular work by men, from Nicholas Sparks to for instance J. D. Salinger. Catcher in the Rye—although I like it very much—is profoundly and disturbingly misogynistic and yet seems to get a critical pass both online and off. This happens a lot, I think, with books by men, and I don’t want male writers (including me!) to get that pass.

Increasingly, it looks as though the women of the YA blogosphere aren’t going to let that happen. Green may hold the keys to the hearts of his fans, but he doesn’t hold the key to YA publishing.

Update: Friday on Twitter, Green continued to weigh in about the debate in a conversation with Maureen Johnson and other writers: 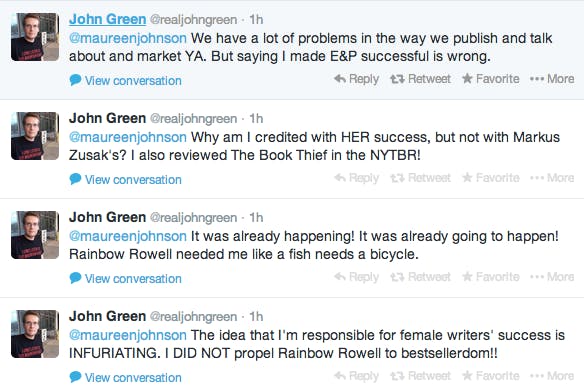 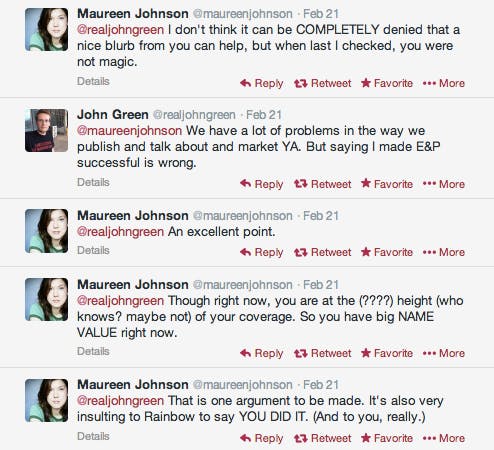 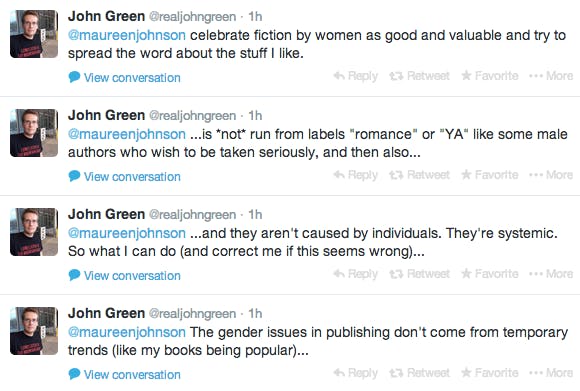