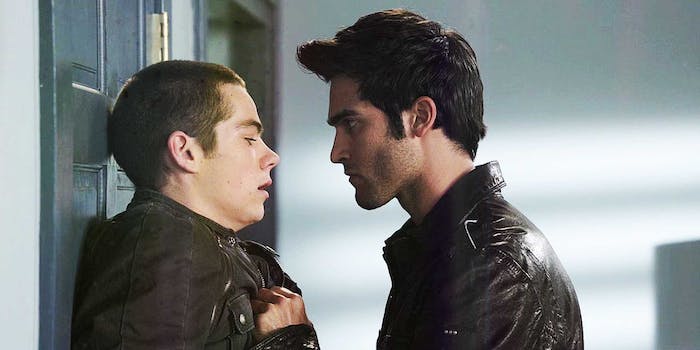 Every week before the show airs, Teen Wolf showrunner Jeff Davis spends an hour or so answering fan questions on Tumblr. Who’s the tallest guy in the cast? Did you always want to write for TV? How many shirtless scenes can we expect in this week’s episode?

Is Sterek ever going to happen?

Sterek—the as-yet nonexistent romance between teen human Stiles and smouldering werewolf Derek Hale—is a major point of contention in Teen Wolf fandom. In the past, the pairing defeated several more mainstream fandoms (Supernatural, Harry Potter, Doctor Who…) in AfterElton’s Slash Poll, and Sterek has also been at the center of a fan campaign in which hundreds of cookies were sent to MTV headquarters.

However, there’s no evidence yet that Sterek will ever progress past the “normal” slash pairing stage of fans interpreting onscreen subtext into fanfic.

This week’s Tumblr Q&A featured a question that inspired widespread groans of embarrassment among Teen Wolf fans—regardless of whether they shipped Sterek or not. Tumblr user suaine, who has a popular Sterek-themed blog, wanted to know why Derek had been given a female love-interest this season.

Dear Jeff, I was really terribly hurt by the way Derek and [Jennifer] Blake were introduced as a “romance” and am resenting the entire storyline to a degree that I never thought possible from this show. Considering I’m a diehard Sterek shipper, will there come a point where I can love Blake?

Jeff Davis’ answer indicates a definite sympathy for Sterek fandom, but carefully points out that it’s he and his writers, not the fans, who are ultimately in control of what happens onscreen. “The truth is,” he replied. “No show is written by the fans.”

Davis has always been close-mouthed about the future of Sterek, treading a fine line between acknowledging the fandom interest but not actually catering to it. It’s a far, far more positive outcome than was recently seen in Supernatural fandom, where star actor Jensen Ackles banned “gay questions” at a fan convention.

The question is, does the popularity of Sterek have a deeper significance in the campaign for better representation of LGBT characters on TV? Or do most fans just want Sterek to happen because they “ship it,” like any other popular fanfic pairing?

Unfortunately, if it’s the latter then it’s kind of difficult to elevate Sterek above Harry/Hermione, Dean/Castiel, or any other non-canon ship. A TV show isn’t a democracy, and just because a lot of fans want something to happen, doesn’t necessarily mean it will. 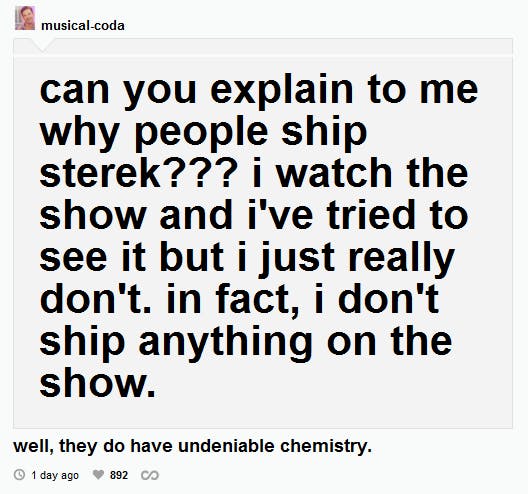 Online fandom generally includes a higher proportion of LGBT fans than typical “real-world” audiences, and slash pairings represent the kind of stories that are often ignored by mainstream media. Fanfic can be a rebellion against a conservative source text, particularly if fans feel that certain characters have been treated poorly—or inaccurately.

Therefore it can be highly frustrating when shows like Supernatural maintain a ruggedly heterosexual persona for their main characters, while simultaneously hinting at homoerotic tension in almost every episode. No homo, bro.

Ten or 20 years ago, that tension was generally accidental because TV showrunners just didn’t seem to realize that close, bantery relationships between manly dudes could be interpreted as being kinda gay. But nowadays, the creators of things like Star Trek or Sherlock or Merlin have to know, unless they’re walking around Comic Con with their eyes closed. Sadly, they often end up catering to slash fandom audiences by teasing them (“queerbaiting”) without ever actually featuring a gay pairing onscreen.

Teen Wolf, happily, is not queerbaiting anyone. The showrunner is openly gay, and explained very early on that if he can create a universe where werewolves exist, then he can also create a universe free of homophobia. At least two of the secondary characters this season are gay (as well as a handful of single-episode characters in the past), and several lead characters have made it clear they’d have no problem being in a queer relationship. Davis has also promised more LGBT representation in the show’s future.

The only problem is, there’s no indication that Sterek will be included on that list.

While there have been hints that 16-year-old Stiles is bisexual, Derek’s only known relationship was with a woman (she was an evil werewolf hunter, in case you were wondering), and season 3 has seen the introduction of female love interest Jennifer Blake. So it’s kind of hard to argue that a campaign for Sterek is a campaign for LGBT visibility, since Teen Wolf already seems pretty committed to representing Sterek’s supposed demographic—i.e., cute young gay guys.

The Sterek campaign indicates something of a generational divide in fandom. Older fans tend to think of slash as a fanfic-based concept that needs no “real” evidence in canon, but fans who grew up with shows like Glee are more likely to want gay ships to be validated onscreen. In some ways, this type of shipper has a lot in common with Larry Stylinson believers—i.e., conspiracy theorists who think two of the members of the boy band One Direction (Harry/Louis = “Larry”) are having a secret gay affair. In Larry fandom, there are often clashes between people who “just” write Larry fanfic, and people who believe there is “canon evidence” in real life.

At least one Larry believer has made the Sterek/Larry connection already:

When I see Dennifer [Derek/Jennifer] Shippers calling Sterek Shippers “delusional” the only thing that comes to my mind are the 12-years-olds 1D fans who also call Larry Shippers that. I can’t take any of your posts seriously. Sorry.

So, how much canon evidence is there for Sterek? Well, as always, it’s pretty subjective. If you showed an episode of Teen Wolf to a non-slash-fan, they’d probably guess that the primary slash pairing would be between Danny (the main canonically gay character) and someone else. But to someone familiar with slash fanfic, Sterek seems far more obvious. 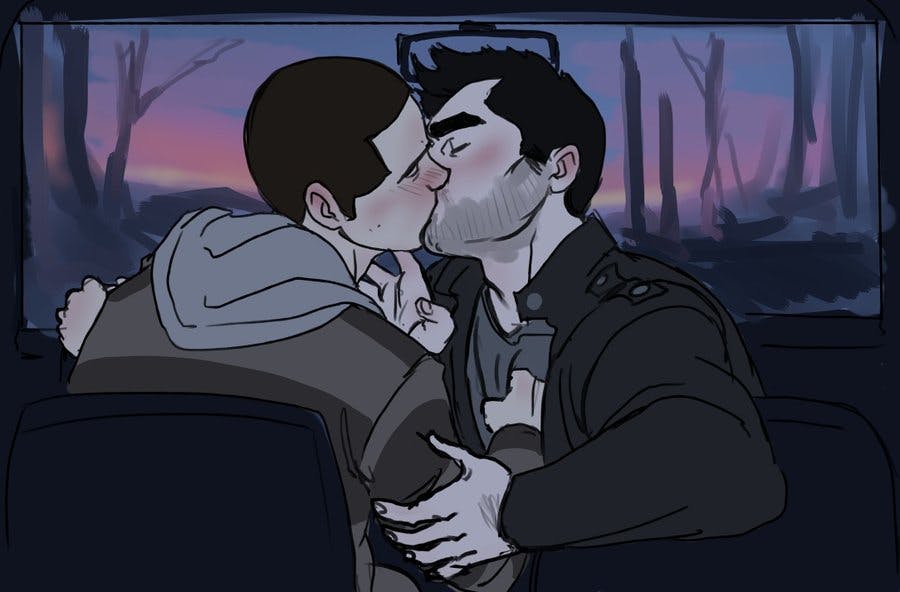 Many things that are traditionally interpreted as “slashy” are a product of classic buddy-show tropes, such as bantery antagonism, close male bonding, and physical contact in the form of fighting or rough-housing. Most of Stiles and Derek’s earlier interactions fall into those categories—except for the close male bonding, because they kinda hate each other.

But unlike buddy shows like Supernatural or Starsky and Hutch, Teen Wolf isn’t written by clueless straight guys. If Jeff Davis wants two guys to be close platonic friends, he’ll make them be close platonic friends. If he wants them to be gay, he’ll get them to make out onscreen. There’s no real need for the tenuous middle ground of slashy subtext. So a lot of that Sterek “evidence” is more like a coincidental similarity with homoerotic tropes that were created in a time before gay characters were allowed to be shown onscreen.

When I watched the first season, I was convinced that I was watching a canon pairing. You know, your typical will they/won’t they romance that takes a long time to slowly grow together, build trust, and awkwardly find that they are better together than they’re apart.

Many people who read Teen Wolf fanfic before watching the show (and trust me, there are a lot of them) end up feeling confused because fanfic is so different from what actually appears onscreen. In season 1, Stiles and Derek only interact a handful of times, and Derek has a relatively minor role. Most of the characters dislike and distrust each other (rather than being the happy werewolf pack you’ll find in fanfic), and the primary focus of the first season is the romance between actual teen wolf Scott, and his girlfriend Allison. The biggest surprise comes when you realize that Stiles is not the main character.

Still, that’s not to say that there’s no Sterek subtext in the show, and it’s definitely possible that the pairing will happen in a season or two. Plenty of past fan campaigns have come to fruition, after all. In Buffy the Vampire Slayer, the character of Spike—originally a single-serving villain—was so popular that he became part of the main cast, and even had a romance with Buffy herself.

But for the next few episodes at least, Sterek fans are going to have to get used to the fact that Derek has a female love interest.