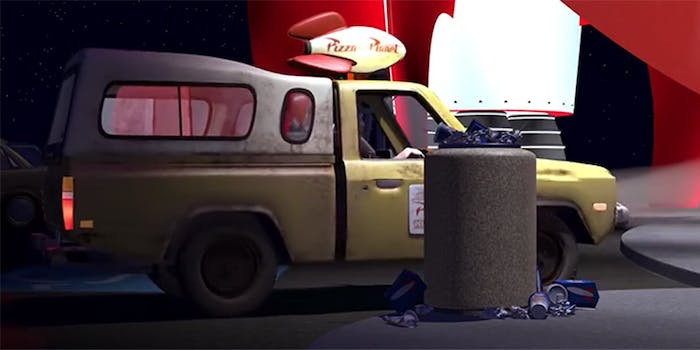 To infinity—and the Pizza Planet.

Anyone who’s seen Toy Story knows the allure of Pizza Planet, the greasy eatery and arcade utopia where Buzz Lightyear and Woody run into the claw machine-obsessed aliens after hitching a ride in a delivery truck.

Now the restaurant is getting a real-life iteration at Walt Disney World in Florida, where it will take the place of Redd Rockett’s Pizza Port in Tomorrowland, Cosmopolitan reported Wednesday.

The Toy Story-inspired pizzeria, to be called “Alien’s Pizza Planet—A Better Place,” will open April 13. It’s planned to be a temporary fixture, according to Disney News Today. But other restaurants, like a Beauty and the Beast-themed Red Rose Tavern, have ended up sticking around past their temporary status.

It won’t be the first time Disney has tried to bring the iconic Pizza Planet (and its accompanying nostalgia) to life. Buzz Lightyear’s Pizza Planet Restaurant was called “Disney unworthy” and shut down at Disneyland Paris in 2016, according to Cosmopolitan.

Disney’s Hollywood Studios in Florida also once had a Toy Story Pizza Planet—until it was shut down in 2016 and replaced with a Muppets-themed restaurant.

Based on the name, it seems safe to say the new Pizza Planet’s theme and decor will focus on the Little Green Men. As Cosmopolitan noted, it’s a perfect opportunity to incorporate details from the movie—like alien slime soda and the claw game.

And in case the Pizza Planet isn’t enough to get fans excited, Walt Disney World has already announced that it will open Toy Story Land in June. So there’s plenty of Toy Story nostalgia to come.