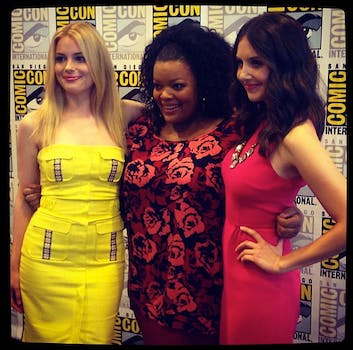 Buzzed: 3 things we learned from Comic-Con

What happens when Twilight actor Robert Pattinson, the cast of Glee, and comic book legend Stan Lee split a cab in San Diego? They end up at San Diego Comic-Con International.

The annual convention dedicated to all parts of pop culture—but seemingly very little dedicated to actual comics—was held this past weekend in California. The panel-laden convention, which hosted talks about shows like True Blood and upcoming movies such as Iron Man 3, revealed some nuggets of information, but it’s the Web aspects that we’re most excited about.

Here are the three things we are most pumped about from this year’s edition of SDCC.

1) “Dr. Horrible” is coming to television

2) Community will still be watchable

After the ousting of show creator Dan Harmon in May, many fans of the NBC show Community were worried that the show will lose its quirky voice. A Twitter account popped up soon after the news, lambasting the show’s new leaders, David Guarascio and Moses Port, but they said the show will be fine.

“It’s all going to be OK,” Guarascio said at the show’s panel Friday. He added that the show’s fans, many of which are fervent Tumblr users, “influence what happens on screen.”

But the parody Twitter account did manage to add in one zinger about the show’s new overlords: “NBC forces us to stay quiet about all the changes we’re making to Community at the panel today. They hooked us up to electroshock cables.”

As long as it’s not a Whitney cross-over.

Producer Felicia Day showed off the newest show on her YouTube premium channel “Geek and Sundry” at a panel Saturday. The new show, titled “Written by a Kid,” is what happens when you visualize kids’ stories. Hollywood professionals such as Joss Whedon star in one-off shows that bring kids’ superhero stories to life. It premieres this Wednesday at 1pm ET.

But if you’re still annoyed that you couldn’t make the trek to San Diego to experience the pandemonium itself, we found tons of great snippets on YouTube, Twitter, and Instagram. A search for “Comic-Con” on YouTube from videos posted within the last week yielded 9,800 videos. According to social measuring service Topsy, a search for “Comic-Con” revealed more than 131,000 tweets from the last seven days and tons of pictures collected from Twitter. But if those are boring, look at hipster-fied photos from the nerdy convention might make you reconsider ever wanting to go there.