Bring your friends if you really want to play Battleborn

Gearbox’s new shooter expects you to sign on for the long haul, which means you need a team.

If I didn’t have to play Battleborn with random players, I’d be having a much better time with this game. 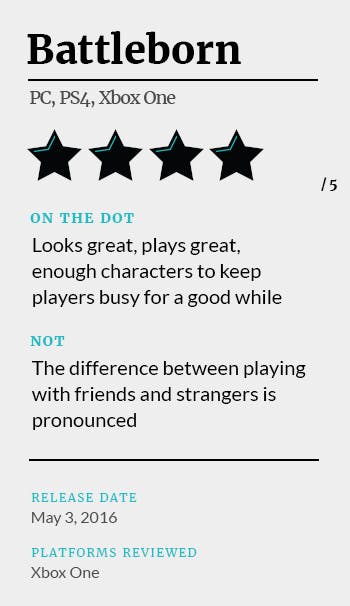 Battleborn combines first-person shooters, tower-defense games, and multiplayer online battle arenas, and attaches this Frankengame to a story campaign. The mix of genres is then wrapped in Gearbox Software’s distinct style and attitude.

Opening with an original hip-hop track played over the animated intro, the writing features the same flavor of wise-ass dialogue, over-the-top silliness, and lovably idiotic characters that you find in Borderlands. Battleborn takes the bright colors and comic-book-style art of Borderlands, and turns the aesthetic up to 11. The game looks downright like a cartoon.

It’s not as simple as that, however, because where the Borderlands series was focused on co-op campaigns that featured real characters and stories, Battleborn’s story mode feels like training for its multiplayer mode. Whether or not you love that half of Battleborn may depend entirely on how many friends will be playing the game with you.

Battleborn is the first game to be released in the current wave of triple-A “hero shooters” hitting the market. You don’t choose a character class with a varied number of weapons and perks you can mix-and-match. Instead you choose a Battleborn (read: hero) with a fixed weapon and fixed abilities. You can level up that weapon and those abilities, but you cannot change them.

The titular Battleborn are the best warriors from a number of different factions that oppose the imperialistic Jennerit Empire. The Jennerit, led by a villain named Rendain, have joined forces with a demonic race called the Varelsi that are extinguishing all the stars in the galaxy.

The other factions in the struggle, led by a soldier named Ghalt, are trying to prevent Rendain’s plans and save the galaxy’s last remaining star. The eight missions in Battleborn’s story mode tell that tale. They don’t have to be played in order. One mission does pit the player against Rendain to foil his plot, and thus is the end of the story, but the remaining seven missions could be played out of sequence and still make sense.

There are 25 different Battleborn, only a few of which are open to the player at the beginning of the game. The other characters are slowly unlocked as the player finishes missions and multiplayer matches. Unlocking all the Battleborn, learning how their abilities work, and how to play them effectively is part of the game’s long-term appeal.

Characters start at level 1 at the beginning of each mission or match. When they gain experience and level up, the player has to make a binary choice between making one of the character’s two abilities more powerful. My favorite character, a soldier named Oscar Mike, has a grenade launcher and a stealth field, so my basic choice is to play it loud or be more sneaky in my tactics as I level up.

Gear, like helmets, chest armor, and boots that can temporarily increase your health, shield regeneration, and ability cooldown rates, for example, is another way to customize your Battleborn.  You can earn gear as loot drops by killing bosses, get it as a reward for meeting experience point benchmarks, or spend credits you earn during missions to purchase Loot Packs.

You can tackle story missions solo in Battleborn, but each mission can last up to 45 minutes, depending on the difficulty setting. The boss enemies are bullet sponges that are boring to tackle alone, and there are objective defense portions of most missions that may be harried exercises (not in a good way) when you run them solo.

You can be grouped with up to four random players for missions via Battleborn’s matchmaking system. Running with random players can be an issue if no one is on voice chat and communicating, because your team shares a pool of extra lives/respawns. One idiot playing lone wolf can sap all your team’s respawns, after which the entire mission can easily go straight to hell.

Running story mode with random players isn’t as bad as trying to run multiplayer with people you don’t know, or aren’t communicating with, however. One of the three types of Battleborn multiplayer matches, Capture, is a typical Domination-type mode. You control three areas on the map to earn points and win. You can also build static emplacements like turrets and healing stations.

Playing Capture with random players is generally doable, probably because most shooter players are familiar with Domination-type multiplayer modes. Playing Incursion and Meltdown modes with randos is a different story.

In both the Incursion and Meltdown multiplayer modes, each team of five players has a base. Each base spawns little AI-controlled robots called minions. “Minions” is nomenclature pulled directly from multiplayer online battle arena, or MOBA games. The minions follow set paths through the map—those paths are referred to as “lanes” in MOBA games—and victory ultimately comes down to how well each team escorts and defends their minions.

In Incursion, the minions are used to strip the shields off the other team’s giant sentry robots, making the robots vulnerable to attack, and the goal is to destroy both of the other team’s pair of sentry robots. In Meltdown, each team earns points for escorting their minions into giant incinerators, and the first team to reach the match point total wins.

You are, of course, also running around and killing other players during all three types of multiplayer matches, which earns you experience points, levels you up, and lets you increase the power of your Battleborn’s abilities. Leveling up heroes during matches is another hallmark of MOBA games.

Incursion and Meltdown modes also feature the same turret building mechanics as Capture mode. Building turrets, and destroying the other team’s turrets, earn you experience. In Incursion mode there are also NPC mercenaries you can “hire” to attack the other team, by destroying the guards at the mercenary camps.

Whether or not you can execute any or all of these tactics successfully when you’re matched up with random players is a crap shoot, because we’re basically describing MOBA games here, and MOBAs are built around teamwork.

Finding synergy between different Battleborn matters, because fixed weapon and ability sets define what they can or cannot do well. Gear sets can also change the way different Battleborn operate during a match, so coordinating these adjustments is probably, also a good idea.

Coordinating tactics in Incursion and Meltdown modes is much more important than in Capture mode, in my opinion. Is anyone taking charge of building and upgrading friendly turrets? Can the team spare you from the front lines, so that you can attack a mercenary camp, in Incursion mode? Which lane in Meltdown mode should you generate extra minions for?

Again, the long-term appeal of Battleborn is arguably unlocking and learning how to play as all 25 of the game’s heroes. That’s going to require a significant time investment. Battleborn is a game that Gearbox wants you to sink your teeth into, and strap in for the long haul. And if you don’t have a ready group of friends for Battleborn, this to me sounds problematic.

I don’t think too much about how Call of Duty or Battlefield relate to solo players because in addition to the single-player campaign they feature Deathmatch modes in which a lone player can hypothetically be very effective.

High-level activity in Destiny or The Division is unfriendly to solo players, but these games also feature plenty of missions with a simple “Run from A to B and kill everything along the way” structure, without a limit to how many times players can respawn. Those missions are learned by rote, so everyone knows precisely what to do, and players tend to stick together without having to communicate.

Battleborn, on the other hand, has the same problem that Evolve suffered. The game doesn’t shine unless you have real communication among teams, which is tough to find with random players. I can’t see myself sticking around to learn all the different Battleborn and embrace what this game is ultimately about without a group of friends to play it with.

Battleborn is a game that could really benefit from offering a free demo that doesn’t expire like an open beta test. Battleborn is dense enough to be easier to sherpa someone through rather than try to explain how the game works, and giving away a free taste might be all it takes to convince a friend to hop on board.

Disclosure: Our Xbox One review copy of Battleborn was provided courtesy of 2K Games.