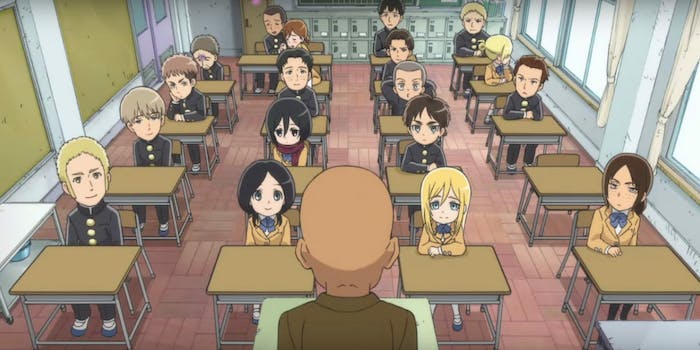 Nothing will prepare you for the ‘Attack on Titan: Junior High’ trailer

This show re-imagines 'Attack on Titan' as a child-friendly comedy series. Seriously.

In the long wait for another season of the Attack on Titan anime, we’ve already seen one bad movie adaptation, numerous amazing cosplays and creative projects, a ton of weird advertising tie-ins, and now… a lighthearted tween spinoff?

Attack on Titan: Junior High is exactly what it sounds like: an Attack on Titan anime where all the characters are adorable cartoon kids who attend school together. Plus, you know, titans.

Based on a parody manga of the same name, Attack on Titan: Junior High will begin in October. Incredibly, the same voice actors who play the original Eren, Armin, and Mikasa are reprising their roles for this show.

What better inspiration for a cute chibi show than a graphically horrific series about the end of human civilization?