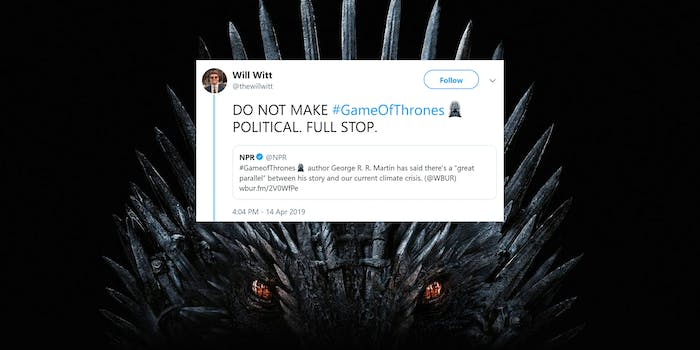 Please do not make ‘Game of Thrones’ political, whine conservatives

All the thinking face emoji.

Game of Thrones is a fantasy epic about zombies and dragons set in a made-up Middle Age-esque era on a fictional continent. It is an extremely well-done show, and it is excellent escapism.

But it is also is a work of art, and like many, many, many works of art, it has meaning outside a very narrow reading of its plot. Like, take this quote from author George R.R. Martin about the White Walkers, the main villains in the show:

It’s kind of ironic because I started writing “Game of Thrones” all the way back in 1991, long before anybody was talking about climate change. But there is — in a very broad sense — there’s a certain parallel there. And the people in Westeros are fighting their individual battles over power and status and wealth. And those are so distracting them that they’re ignoring the threat of “winter is coming,” which has the potential to destroy all of them and to destroy their world.

Martin gave that quote in 2018 to the New York Times in response to being asked about people who had seen the White Walkers as a metaphor for climate change. Because that’s what people do with art. They observe it, interact with it, and apply larger meaning to it.

Unless you are conservative who saw a news story about this old quote in advance of the season 8 premiere.

NPR published a story about Martin’s quote—a topic which has been theorized over online since at least 2013—and it prompted this hissy fit from Prager University’s Will Witt:

I remember a time when our art and media was disconnected from politics. Now everything on TV, music and movies has to have a political message shoved down our throats. Let’s get back to the days when that wasn’t the case.

“DO NOT MAKE #GameOfThrones POLITICAL. FULL STOP,” Witt wrote. “I remember a time when our art and media was disconnected from politics. Now everything on TV, music and movies has to have a political message shoved down our throats. Let’s get back to the days when that wasn’t the case.”

It was a complaint echoed by others.

Since I fully intend to enjoy this last season of Game of Thrones, I’m going to pretend you didn’t just try to make this fantasy show political. With all that is holy, please let us have ONE. FRIGGING. THING. that is not about politics. pic.twitter.com/4Oz7j7SLy1

But it’s not really true. Art has and always will be political. Social media makes things more front and center, but it doesn’t mean people only started embuing the works they make with meaning about the world around them when Donald Trump got elected. That’s not and never has been the case.

And any artist has a right to make art about whatever they want. If George R.R. Martin says his work has a political message, well, you’re welcome to ignore it, or disagree with it, or refuse to consume his show.

Thankfully, this take was here to get savaged.

When people complain about media they consume being "political" they don't mean "political" in the sense of "of, relating to, or concerned with politics"

He’s the author, dipshit. He can make #GameOfThrones whatever he wants.

The books were heavily inspired by the war of the roses. Daenarys spends most of the series on a crusade of slavery abolitionism. The religions are thinly-veiled versions of real-life faiths. The series has politics of past and present backed into its DNA.

But one more thing! Even if you’re cranky this is a political show that talks about politics, there’s a character who doesn’t believe the White Walkers are a threat, who believes they can be ignored, and who willfully backed out of a pact among everyone in the world to try and fight them.

So shut up and root for Cersei!