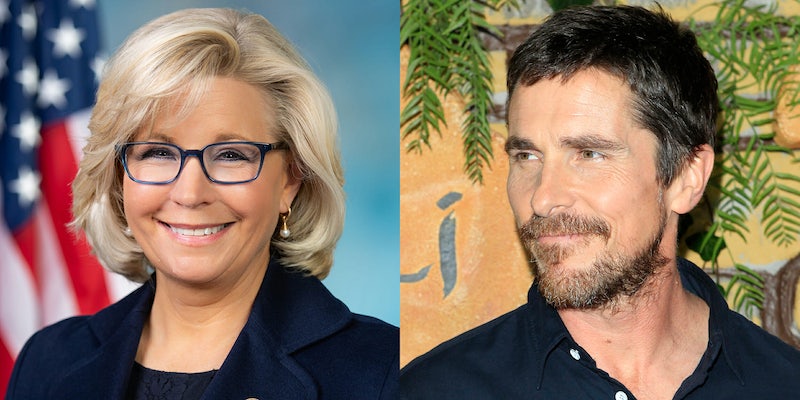 Satan probably inspired him to do this, too. Christian Bale arrested for 'assault on mother and sister'| The Independent. https://t.co/kesnNno9Zv

“Thank you to …Satan…for giving me inspiration on how to play this role,” Bale said after winning “Best Actor in Film, Comedy, or Musical” for playing Cheney in Vice.

The line drew laughter and applause from the audience, as Cheney was instrumental in the U.S. going to war in Iraq and in instituting the torture of detainees. Many on Twitter also loved the comment, including the Church of Satan because, obviously.

Christian Bale just thanked "Satan, for the inspiration" during his acceptance speech for playing Dick Cheney in 'Vice' and I am DED #GoldenGlobes

To us, Satan is a symbol of pride, liberty and individualism, and it serves as an external metaphorical projection of our highest personal potential. As Mr. Bale's own talent and skill won him the award, this is fitting. Hail Christian! Hail Satan! https://t.co/ILuK8TFZXi

Christian Bale just thanked Satan for giving him the inspiration to play Dick Cheney and then blasted Mitch McConnell. I love 2019!

Soon after, Liz Cheney tweeted, “Satan probably inspired him to do this, too. Christian Bale arrested for ‘assault on mother and sister.'” She was referencing the 2008 incident for which Bale was arrested following an alleged family fight, but the charges were eventually dismissed.

Her “don’t throw stones” retort was met with an intense backlash by people who simply hate her father, however.

Your father presided over the killing of more than 500,000 Iraqis & decimated their cultural centers. He sent our men in uniform to their deaths. He orchestrated the whole thing, then he destroyed innumerable documents before leaving office. Only the most evil have done more.

Your father's a war criminal ;)

Your father killed millions of people.

Classic GOP move send an article with a damning headline but doesn’t read the article to see that it’s much ado. A political strategy that is dependent on skimming the surface is ultimately doomed to unravel. Also your dad is a self serving monster.

Vice, released in December, covers Cheney’s role in the Iraq War but also humanizes him as a father trying to come to terms with his daughter Mary Cheney being gay. Liz and Mary had been in the public eye for their disagreement on the issue of same-sex marriage, which was reportedly a crucial factor in Liz’s run for U.S. Senate for 2014. She eventually dropped out, but people remember her selling her sister out on the issue of same-sex marriage. And many responding on Twitter reminded her of that.

What you did to Mary doesn't give you any ground to stand on.

Go give your sister Mary a hug. That’s more important than your failure response to the man.

Liz did have support from other conservatives though, who were, of course, also unhappy about the Satan reference.