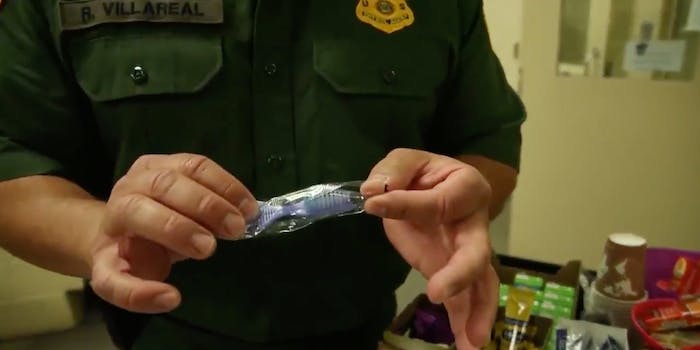 'We're not forcing aliens to drink out of the toilet.'

People are not reacting positively to a video Customs and Border Protection posted touring their Tucson, Arizona facilities. Many are calling the video a prime example of propaganda as CBP attempts to fix its image in the eyes of the American public.

Show us the cooler and toilet sink packed with people!

Where are the people? pic.twitter.com/QseKUoeufB

In the video, Chief Patrol Agent Roy Villareal goes through the facility, pointing out what could be considered the niceties and amenities of such a place. “My goal today is to dispel some of the misinformation that’s out there in regards to our detention facilities,” says Villareal before showing that people being held there have access to hygiene products such as toothbrushes. Previously, Justice Department lawyer Sarah Fabian faced public backlash after comments made by her suggested that hygiene products such as soap and toothbrushes might not be necessary to qualify such facilities as “safe and sanitary.”

In particular, the organization RAICES, an immigration legal services provider, was quick to point out the reality of the situation. In their comments, RAICES pointed out that the CBP has a $12-million contract with the marketing agency Ogilvy to produce public relations videos for them such as this one.

PSA: This is State Propaganda. The DHS Inspector General (who oversee CBP) yesterday reported on just how bad the conditions are inside these camps.

PSA 2: A Public Relations company called @Ogilvy has a $12m contract w/CBP to help them with public relations such as this video. https://t.co/OV5dHwVzfs

One of the closing remarks of the video is Chief Patrol Agent Villareal attempting to negate a claim that people being held in this complex resorted to drinking toilet water. “We’re not forcing aliens to drink out of the toilet,” he said. The fact that this is a sentence that Villareal had to say and attempt to disprove is all the proof you need to know that something is fundamentally wrong here.