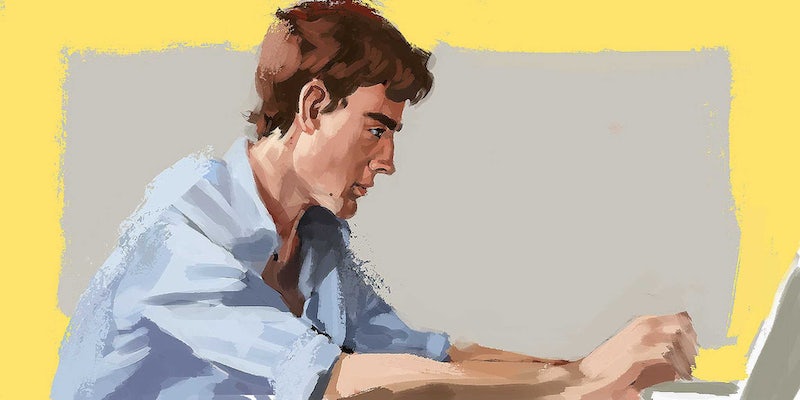 Zach Latta is hacking his way to a better tomorrow.

Zach Latta coordinated our interview through artificial intelligence software, using me as a guinea pig to see how adept a computer assistant could be at scheduling meetings. “Amy” proved to be a reliable assistant and a fantastic icebreaker for discussing how his interest in technology and software development makes Latta different from his peers.

The 18-year-old is one of this year’s Thiel Fellows, an initiative from venture capitalist Peter Thiel that awards kids $100,000 to pursue their startup ideas for two years instead of going straight to college. Latta founded Hack Club, formerly hackEDU, which works to bring coding programs to high schools around the world.

The programs are targeted at students who wouldn’t normally sign up for Advanced Placement computer science courses and provide an extracurricular outlet for students who love to build things and want to learn more about technology. Right now, Hack Club includes 1,500 students from 47 schools in 11 states across four countries.

Diversity is a major focus of Hack Club, especially as minority students tend to belong to groups underserved by computer science courses and take the AP computer science exam at alarmingly lower rates than white and/or male students. According to Latta, 32 percent of Hack Club members are women, and the club is working toward 50 percent participation. Thirty-seven percent of members are black or Hispanic.

Hack Club is a direct result of Latta’s own high school experience. He struggled within the confines of the classroom, but his parents—social workers who focus on assisting homeless individuals—encouraged his extracurricular activities. In fact, his mom accompanied him on his first job interview as a freshman in high school for a programming job at game development startup Run Games. He earned that opportunity after impressing two programmers at a hackathon at the University of Southern California while he was still in eighth grade. He ended up working on the mobile game Football Heroes, which received more than 1 million downloads in Apple’s App Store.

“I feel so incredibly fortunate and so privileged to have parents who have been supportive of me.”

After two years of high school and taking college-level classes at local community colleges for credit, he took the California-based test to receive a high school diploma early.

“I feel so incredibly fortunate and so privileged to have parents who have been supportive of me. For us, it was a process over time,” Latta said. “What eventually happened was [my parents] saw just how much happier I was and how much more I was learning, deciding to do what I wanted to do. My mom was the one who encouraged me to take the test … because she saw how miserable I was.”

In July 2014, he moved up to the Bay Area. The next day, he had coffee with the founder of Yo, the messaging app that allows users to send “Yo”—and only “Yo”—to their contacts. The app exploded in popularity that summer as a fun way to both entertain and annoy friends. Eventually, Yo pivoted to become a more substantial notification service, acquiring media partnerships meant to amplify breaking news. Latta led the engineering team as a contractor until mid-September, and his responsibilities included hiring people with years more experience than him.

“He’s a unique individual. I’ve never met a 17-year-old with so much knowledge in computer systems, databases, deployments and so on,” Or Arbel, co-founder and CEO of Yo, told the Daily Dot. “It’s like speaking with a 40-year-old senior software architect. His [Hack Club] project shows he is also not only software-oriented but operational as well.”

The technical experience was clearly beneficial to the newly minted San Francisco resident, but the networking opportunities proved equally fruitful as well.

“One of the things that I realized while I was at Yo that I didn’t realize before, was how close people I saw as high authority figures were to me and my network,” he said. For example, Latta explained excitedly, he got to meet one of the founders of Foursquare at a random dinner in New York City. “Even scrolling through my Facebook friends list, [I was connected to] really distant people that accomplished great things, and I might actually have the opportunity to talk with them.”

Latta currently lives in a house full of other techies and Thiel Fellows in the Castro District. These kinds of “hacker houses” are common in Silicon Valley and frequent in the greater Bay Area; they’re rented out by individuals either working together or on their own separate companies and projects. Some houses are converted to dormitory-style living spaces with multiple beds in each room, but ultimately the houses all serve to bring together entrepreneurs and programmers in close proximity to hack until the wee hours and to collaborate in the hustle for venture capital.

“I’ve never met a 17-year-old with so much knowledge in computer systems, databases, deployments and so on. It’s like speaking with a 40-year-old senior software architect.” Yo co-founder Or Arbel

The Castro house where Latta lives with six other people has a broader age range than most; Latta is the youngest and his oldest roommate is a decade older. All but one of his roommates work in technology, focusing on specialties from the medical field to journalism.

“It’s this really amazing atmosphere where I find myself constantly challenged,” Latta said of his house.

Living in San Francisco is a stark contrast to the conservative Los Angeles suburb where Latta grew up. He said his eyes were opened to different forms of creative expression he wouldn’t find in his hometown, but his age has also precluded him from attending most social events, especially those held at bars.

Homesickness wracked the first couple months of his transition, but he still frequently visits his former residence. His parents still joke that he stole two years from them. He says when he’s home, he helps his sister, who just started high school, with math homework. Despite the hardships and some of the typical teenage experiences he’s missed out on, Latta doesn’t regret his decision to skip prom or walk in a high school graduation ceremony.

“I feel like I’m missing out on those things, but because of the path that I did choose to take, I went to Estonia last week,” he said. “I never thought I’d ever go to Estonia. I gave a talk to 250 Estonians and it was the most amazing experience ever.”

For all his success in just 18 years, he says his biggest accomplishment this year is devoting time to reading books instead of reading blogs or watching Netflix. And the book that’s influenced his perspective the most? One found in most high school classrooms: George Orwell’s 1984.