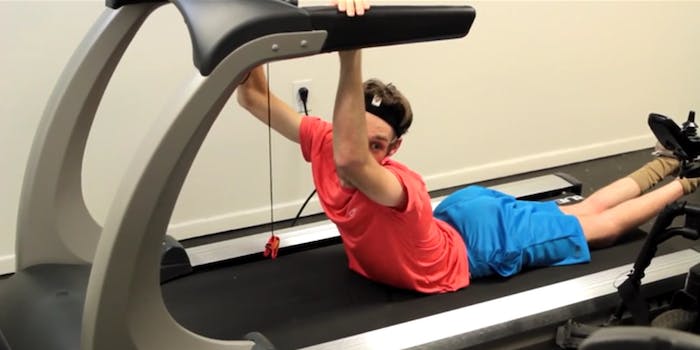 The treadmill is a metaphor for life. Now go forth and find "your own personal Olive Garden."

Zach Anner is the Austin comedian whose Oprah audition video went viral way back in 2010, when he called his cerebral palsy “the sexiest of the palsies.” Since then, he’s used YouTube to show the wheelchair-bound can get around, via his Reddit-powered travel show, Riding Shotgun, and his series of Workout Wednesday videos. A recent treadmill workout might be his most inspirational yet.

As Anner attempts to walk on the treadmill (“I can’t believe my legs work,” he says), we get the physical comedy you’d expect, but as he struggles upright, then on his knees, and then upright again, Anner also gives some poignant life advice:

“Sometimes you’ve got to pull yourself up, because you know you can do it, even when you’re sliding off the treadmill.”

“So what if you don’t have a perfect body? You’re a lot better than where you started, as a baby who crapped himself all the time. You do that a lot less now.”

“It’s better to be walking in the right direction, than running in the wrong one. You could end up at a Denny’s, when you want to be at an Olive Garden. You owe it to yourself to find your own personal Olive Garden.”