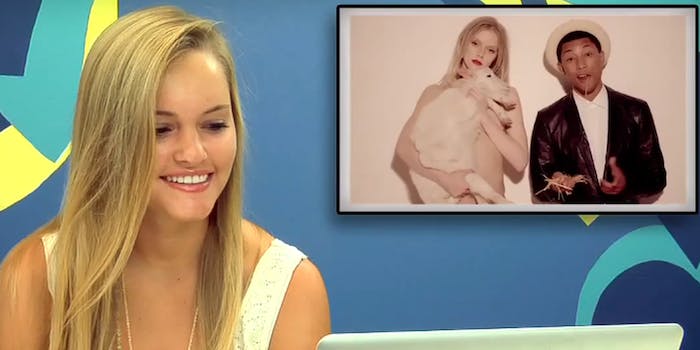 Robin Thicke‘s “Blurred Lines” is the unanimous song of the summer. It’s catchy as hell. But it also is buried in controversy for denigrating women. If you’re worried how teens are interpreting the song, these kids will soothe your fears.

In the Fine Bros.’ latest Teens React video, a group of 14- to 19-year-olds dissect Thicke’s massive hit and accompanying video. Critics argued the song promotes rape culture and these kids seemed to agree. One even argued his life is “a little bit worse” after watching the video.

The teens laughed in shock when told Thicke views “Blurred Lines” as part of a “feminist movement.” The video portrays women as “sex objects,” one teen said. Another girl said she felt “violated” after watching it.

The teens were shown the family-friendly version of the video. Some had already seen the X-rated version with nude models, but others were shocked to learn it existed.

“Why? To make a ‘statement’?” laughed one teen.

Another was worried about young kids listening to the lyrics and taking them at face value. “They’re gonna grow up and think, ‘Oh, if she says no, she could really mean yes,'” he said.