The curious case of YouTube’s most prolific pipe smoker

It’s run by Adolfo Mateo, a middle-aged Argentinian man who has dedicated the last four years of his life to uploading surreal short videos of him smoking a variety of pipes and cigars. To date, he’s posted more than 6,400 videos.

Mateo varies his attire between the videos and includes a breakdown of what he’s wearing—as well as what he’s smoking—in the video title and its description, for the more sartorially inclined.

In one recent video, he’s seen smoking aromatic tobacco from Holland in his Danske Club pipe, while wearing a white hat, yellow T-shirt, Scotland shirt, Levi’s 501 blue jeans, and “Tennis [shoes].” In another one from 2013, he’s kitted out in leather clothes and boots, while smoking a tobacco sold by Troost in his new “White Meerschaum Curved Pipe.”

Mateo’s YouTube channel has 1,801 subscribers, along with 343,258 total video views. This all averages out to just 53 views per video—though some are more popular than others.

The most-viewed is a three-year old recording, in which he wears a blue T-shirt, and has been viewed 8,335 times in total. It’s not clear, outside of his more outlandish attire—leather pants, boots, and a cowboy hat—why this particular video has caught on. Perhaps it was posted somewhere prominently. Others have been watched barely a dozen times.

For someone putting so much of himself out there online, not much is actually known about Mateo. An old Reddit thread reveals he once had YouTube account—since deleted—under the name “Conrad” that had another 10,000 videos.

Mateo replies in broken English to comments on his videos. We reached out looking for answers, and got a friendly—but useless—answer in response. This was the last we heard from him:

His responses to other commentators are much the same. 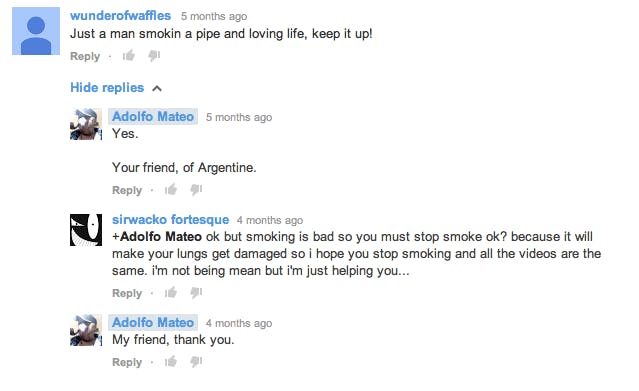 What we do know about Mateo is that he claims to have had a wife, Ana María, whom he calls the “great love of my life.” Mateo has uploaded numerous touching tribute videos to her, sharing photos of her, and has confirmed in a comment that she has passed away, though it’s not clear when or how.

There’s something desperately sad and poignant about Mateo’s channel. It’s window into the world of an ordinary man, deprived of his one true love, devoting his life to his other great passion—pipes and cigars.