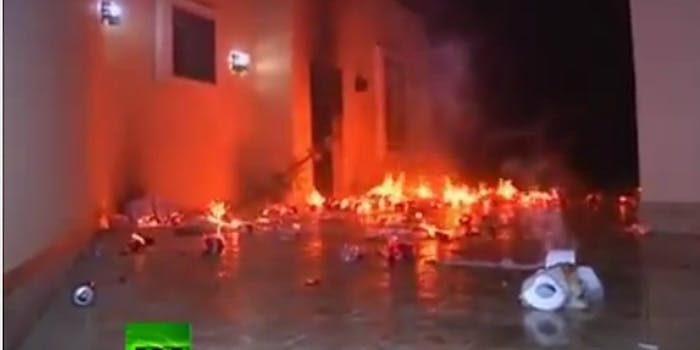 But does it violate YouTube's community guidelines?

The movie trailer mocking the prophet Muhammad that sparked riots killing four, including the American ambassador to Libya, will not be removed from YouTube. It’s staying up despite the fact that the video may violate the video sharing site’s community guidelines.

The amateurish production, released by American Sam Bacile, a 52-year-old real estate developer in California, depicts the prophet Muhammad as an idiot and a child molester. Released on July 2, the film only attracted international attention after Florida pastor Terry Jones included it as part of his “International Judge Muhammad Day.”

In 2010, Jones threatened to burn 200 Qurans on the 10th anniversary of Sep. 11, but backed down after pressure from world leaders and deadly riots in Afghanistan that left 30 dead.

After the video was shown on Egyptian TV Wednesday, Libyans protesting Bacile’s video stormed the U.S. consulate in Benghazi, firing guns in the air and torching the compound as they looted it. A Benghazi official told Reuters that ambassador J. Christopher Stevens and three other consulate staff were killed after protesters “fired rockets at them.” Stevens is the first American ambassador to be assassinated since Adolph Dubs was killed in Afghanistan in 1979.

The events in Libya followed similar protests in Egypt, after a private television channel aired footage of Bacile’s film. Protesters stormed the walls of the U.S. embassy in Cairo, tore down the American flag and burned it

Both Afghanistan and Pakistan have blocked YouTube to prevent the video from spreading, according to reports on Twitter.

Despite the controversy, YouTube itself is refusing to take the video down, citing its adherence to free speech principles. A representative told FastCompany’s Addy Dugdale the company will not remove any video that doesn’t violate its guidelines.

“While we don’t comment on individual videos, what I can tell you is that on YouTube, people worldwide can express themselves by sharing videos in a safe and legal manner, and this sometimes raises cultural and political issues. We have created Community Guidelines to set a global standard for our users. We take great care when we enforce our policies and try to allow as much content as possible while ensuring that our Community Guidelines are followed. Flagged content that does not violate our Guidelines will remain on the site.”

Even Bacile, who told the Associated Press that “Islam is a cancer,” would probably agree that his video “attacks or demeans” Muslims based on their religion. But is Bacile’s video legitimate satire or simple hate speech intended to fuel prejudice? YouTube clearly believes it’s the former, and for now the video isn’t going anywhere.