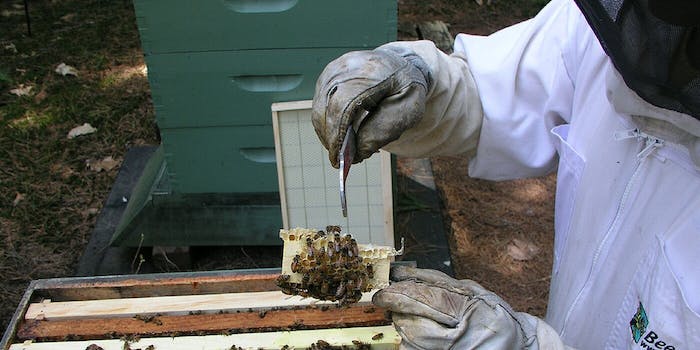 Use the Web to enjoy the fine art of beekeeping and avoid a trip to the ER.

For those who live with an EpiPen in their pockets, beekeeping is a spectator sport best enjoyed by buying a jar of fresh honey at the local farm stand.

If you are smart enough to invest in a protective suit, or have some natural immunity to bee venom, perhaps you’d like to join the other 200,000 beekeepers in the U.S. who dabble in this popular hobby. If you live in Utah, working around stinging, winged creatures may be in your blood—the 45th state is also known as the Beehive State. Or maybe you’re just a fan of Winnie the Pooh.

Courtesy of YouTube, sideline honey worshippers and active apiculturists can learn the fine points of building a hive, adding bees to the hive (holy cow, they can be bought online), maintaining a healthy home (for the bees, that is), and harvesting their honey—separating the waxy buildup from the gooey deliciousness. You also see how fuel-based smoke is used to calm bees down to allow you to work on your hive without being swarmed by a face full of unfriendlies.

One of the best “know before you go” videos on getting started comes from Patricia Boudier, co-owner of Grow Organic, a provider of heirloom seeds for your fruit and vegetable planting needs. What I like best about this short clip is its direct approach to letting a prospective beekeeper know what he or she is getting into from a cost and time perspective. It’s also interesting that Boudier suggests that it’s best to start with two beehives to compare and contrast their activities over time.

Being naive in such things, I never gave it much thought as to how a beekeeper gets winged creatures for the hive. Am I the only one who thought, if you build it, they will come? Bees come in packages delivered via the U.S. mail. And, the queen, given the royal treatment, is carefully sent separately. Other than bee experts, who could imagine bees come in varieties such as Italian queen bees, Cordovan queens, and VSH queens, gathered from around the world. It takes a braver person than me to get close enough to tell the difference.

The harvesting process involves more than chasing the bees away and grabbing their honeycombs. Getting from hive to honey takes place in two steps. Initially, there is some prep work to be done using smoke to move your buzzy buds from one part of their home to another to allow you to prep the supers (boxes that hold the racks in place) and remove individual frames for honey extraction.

Once you’re able to remove the boards from the top parts of the super is when the fun begins. Looking as if she just landed from an Apollo spacecraft, Heather Mezzacappa takes the boards inside her house where she wields a hot iron and scrapes off the wax before placing the wooden pieces inside a honey extraction machine. Once in this contraption, honey drips down the side and out the spout.

If, like me, you are the sort of nerd who enjoys watching programs such as How it’s Made on Discovery Science, then learning about the birds and the bees (sorry) via video is a harmless way to pass the time. It’s also a lot safer than a potential trip to the ER.