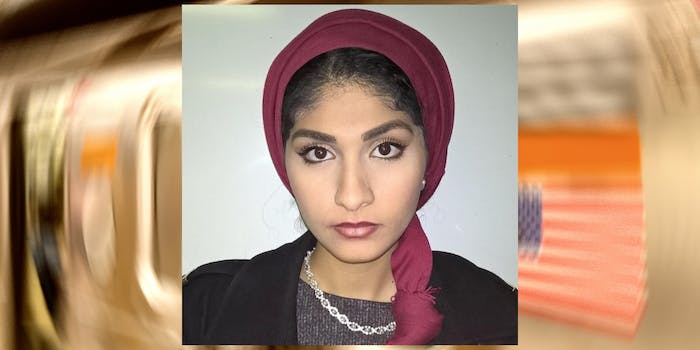 Muslim woman charged for lying about attack by Trump supporters

She alleged that three men called her a terrorist and tried to take off her hijab.

And 18-year-old Muslim college student who claimed that three men verbally harassed her and attempted to take off her hijab on a New York subway, is now being charged with filing a false report.

Yasmin Seweid initially made the report on Dec. 1, telling police that she was on her way home from an event at Baruch College when three drunk white men started to harass her on the 6 train. She claimed to hear “Donald Trump,” said the men called “an F-ing terrorist” and told her to go back to her country, and tried to take off her hijab. During the alleged incident, she told police, witnesses saw the events unfold and looked away instead of trying to help her.

Seweid’s report to the police came just days after a damning Southern Poverty Law Center report revealing that 867 separate incidents had taken place in the first 10 days after the election, many of them anti-immigrant. A few days after the alleged incident, a man was charged with a hate crime for harassing an off-duty female Muslim police officer and her son in a separate incident.

However, police had trouble verifying and finding anyone to corroborate Seweid’s account. Seweid’s parents reported her missing last week, but she was found a few days later. On Wednesday, she admitted to police that she lied about the initial harassment claims so she wouldn’t get in trouble with her parents for breaking curfew, according to New York Daily News.

Seweid was charged with filing a false report and obstructing governmental administration, both misdemeanors.

While police believe that Seweid made up the harassment claim, others are stressing that despite this case there are many legitimate claims of harassment and Islamophobic attacks from Muslims.

“We’re very disturbed by these distressing developments, but we hope that they do not detract from the numerous reports coming from the Muslim community,” Albert Cahn, an attorney for the Council on American-Islamic Relations’ New York Chapter, told New York Daily News.