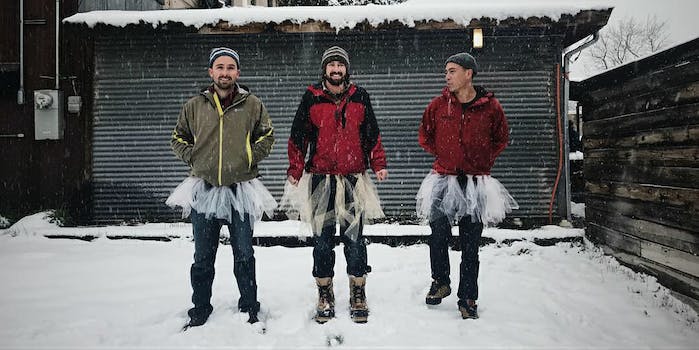 When speaking to high school students last month, Wyoming Sen. Mike Enzi (R) said that some LGBTQ people are “asking” to be beat up for what they wear or how they appear.

“I know a guy who wears a tutu and goes to bars on Friday night and is always surprised that he gets in fights,” Enzi told attendees. “Well, he kind of asks for it. That’s the way that he winds up with that kind of problem.”

Wyoming residents, however, aren’t letting Enzi’s comments slide. Under the hashtag #LiveAndLetTutu, advocates across the state are posting pictures of themselves in tutus at bars and restaurants—and even in the snow.

According to an interview with Wyoming Public Media, Patrick Harrington, of Laramie, started the movement because he wanted to make sure Enzi realizes a huge portion of Wyoming cares about LGBTQ citizens and supports them.

“Our hope with the statewide [efforts] is that even in small communities we’ll get a handful of people to share a photo of themselves in the bar wearing a tutu, so we can show Senator Enzi that he really is representing a large group of people and a really diverse group of people in Wyoming,” Harrington explained.

So Ali and I walked into a bar and asked for a beer. We got em,@SenatorEnzi. #liveandlettutu pic.twitter.com/uoViglV7cP

Fellow Wyoming resident Mike Vanata worked with Harrington on the campaign, planning a bar crawl over the weekend where pubs and restaurants gave discounts to citizens wearing tutus. Vanata is also concerned with Wyoming’s image, and he hopes to show the other 49 states that Wyoming is a place where LGBTQ people are respected.

I reiterate. No one is ever asking for it. Ever. Not only were your words cruel, and your message discouraging and hurtful, to young LGBTQ youth but it was beyond unprofessional. I have heard the argument for the generational gap, and I can not accept that. We live in a time of change and movement, Wyoming is the "Equality" state. That being said, you sir as a voice for our state should also continue moving forward, and trying to better yourself. The only thing I'm asking for is to be treated as though I have a right to exist in the same space, and time as anyone else. #liveandlettutu #notaskingforit

“I’m really upset that Wyoming kind of lives in this dark shadow of a myth that we’re just a completely gay-hating state or something,” Vanata explained to Wyoming Public Media. “And I think from this action, we’re correcting that.”