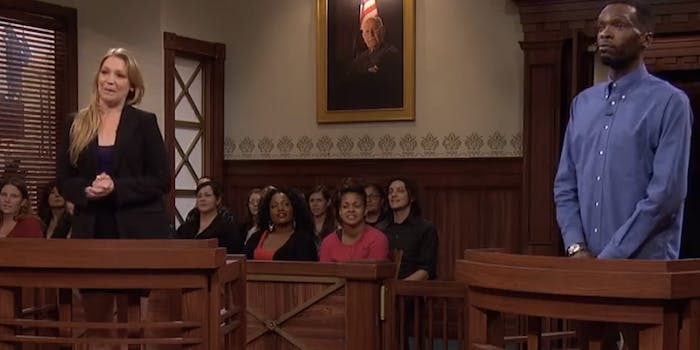 No word on whether both RZA and GZA were present at the festivities.

Remember Divorce Court, that show you used to watch when you were a kid staying home sick from school in between The Young and the Restless and Passions? The one where a bunch of couples would go on and argue in front of a female judge over who gets custody of their tractor? Well, it’s still on the air, and it’s just as fabulous as ever.

Case in point: This case from a show earlier this week, where a dude publicly accuses his girlfriend of sleeping with Wu-Tang Clan. That’s right—he thinks she simultaneously boned all nine members on their tour bus. (It’s unclear if Ol’ Dirty Bastard, who died in 2002, was present for this bacchanal.)

“Well, how amazing was it?” judge Lynn Toler asks.

“She gave Wu some tang,” Nathan helpfully chimes in.

In her defense, Lia says that she would never behave “like a bustdown or a groupie in that type of, um, situation,” though Toler argues that spending the entire night on a tour bus with the Wu-Tang Clan while your boyfriend is at home is indeed “bustdown behavior.” I don’t know about that, but having never heard the word “bustdown” before, I’d like to take this opportunity to inform parents that when you let your children stay home sick from school, rest assured that they are, indeed, getting an education.