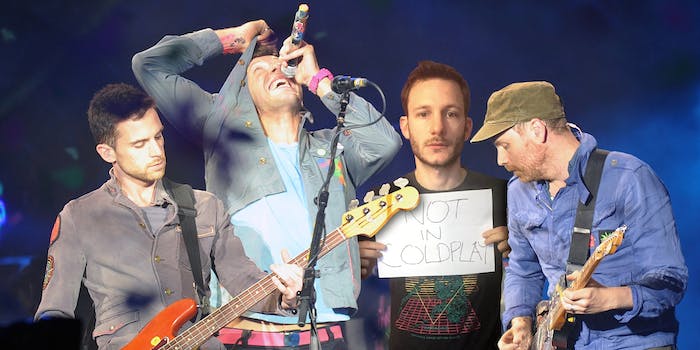 I mean, they do look alike.

Quick, describe Chris Martin of Coldplay. White? A little scruffy? Skinny? Uhh…white? Whatever you think of his band, he’s not exactly the most unique looking guy on the planet. Which is why hundreds of concertgoers wound up following the wrong white, scruffy, skinny Chris Martin on Twitter after Coldplay played the Global Citizen Festival in Mumbai.

Non-Coldplay Chris Martin is a comedian with a verified account, so it’s not hard to see why hundreds of new Coldplay fans may have thought he was the lead singer. But Martin appeared to have fun with it. His Twitter profile now reads “NOT IN COLDPLAY. Currently HUGE in India.”

To the 500 Indian followers I gained in the last day I'm not in Coldplay. I'm sure Chris was great in Mumbai but I can't pass on the message

.@ChrisMcomedy let's take advantage: can any of my new Indian followers hook me up with tickets to the next cricket test match please??

Non-Coldplay Martin told the Daily Dot over email he started noticing his new followers on “Saturday night after a gig in Coventry. I thought the gig went well but didn’t get why 500 people, all Indian, started following me!” And while he says he’s been mistaken for the other Chris Martin on the phone before, it has never happened on this scale.

Still, Martin is going with the flow, and gaining some new fans in the process. “A few people have said they really like [my comedy],” he said. “One guy said I wasn’t funny, but ‘good luck buddy.’ Most polite internet troll ever!”

If anything, this just proves to Coldplay that dropping into India to capitalize on its culture for a clichéd music video is not enough to buy you fame.