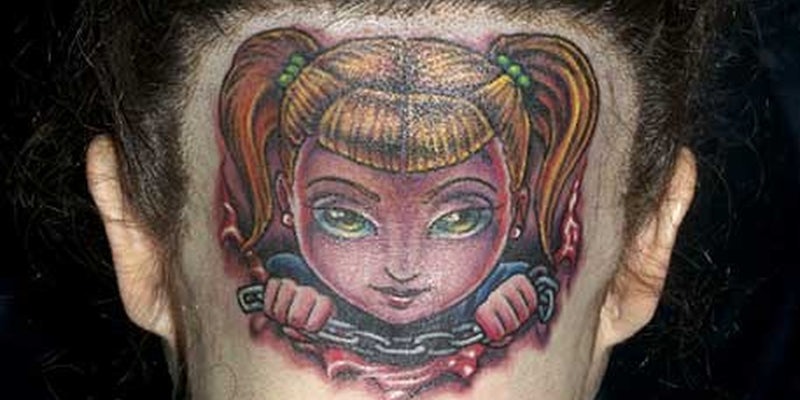 How I found out my girlfriend was on the Daily Mail for a listicle called ‘Worst Head Tattoos’—for a piece I'd never even seen.

“Are you kidding me?” my girlfriend laughed while staring at her laptop. “I’m on the Daily Mail for a listicle called ‘Worst Head Tattoos.’”

At best, the Daily Mail is single-ply toilet paper in a truck-stop bathroom. At worst, the concept of the “listicle” represents the demise of both online journalism and the average reader’s attention span. So I was trying not to get upset about it—because she thought the situation was laughable—but I could feel my blood-pressure rising to unhealthy levels.

Ironically, the picture of my girlfriend’s head had a watermark wherein Break.com claimed copyright of the image. Ignoring the fact that the Daily Mail had therefore clearly lifted the image from another site (and that the image’s copyright actually belongs to the tattooist, Tim Kern), there was the interesting complication: My girlfriend has lectured and written extensively about copyright issues in the tattooing industry. An intelligent writer might want to perform due-diligence and make sure they’re not slandering a lawyer before submitting to their editor.

But that’s not where the irony ends. The fourth woman pictured in the listicle is an alopecia sufferer who was written up in a positive light by the very same Daily Mail on Dec. 3, because she chose to tattoo her head instead of dealing with the irritation of wearing wigs. The same publication that had applauded her now mocked her.

The greatest chuckle of all, however, had to be that despite our five years together, I’ve never even seen the tattoo on my girlfriend’s head. Sure, I’ve seen it in books and magazines; but ever since I’ve known her it’s been covered beneath a thick mane of beautiful red curls. It’s what we call a “Secret Tattoo”—one for the wearer to privately enjoy, not for the public to ogle.

I won’t claim that every tattoo in this listicle has been executed with precision and artistry (though a few are great). But the post seems to achieve little more than perpetuating the “point-and-laugh” mentality and give them another reason to unrelatedly post a photo of Cheryl Cole’s bare ass (tattooed by the insanely talented Nikko Hurtado).

Back in July, Laura Hudson wrote an in-depth article in Wired about “internet-shaming.” She says:

“Internet speech can be cruder and crueler than our real-life interactions, in large part due to our literal distance from the people we’re talking to and their reactions. That detachment can sometimes be liberating, and it’s often a good thing that people speak bluntly online, especially against injustice that they see around them. But a sense of proportion is crucial. These days, too many Internet shame campaigns dole out punishment that is too brutal for the crime.”

But even in the best possible light, what “crime” or “injustice” was the Daily Mail piece revealing? In actuality, the “injustice” was exacted upon those who choose to adorn their bodies. A shaming-campaign that actually created victims, providing the world with yet another example of cyberbullying. 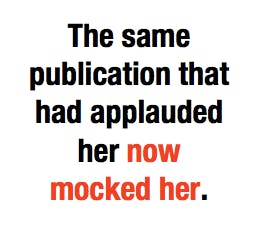 My girlfriend and I are both heavily tattooed. When we lie down to sleep at night, it looks like a box of Marvel Comics was dumped on the bed. But when we wake up in the morning, we put on our clothes and go to our jobs—as a lawyer and an actor—and no one around us is any the wiser about our artwork.

Some people, such as friends who work in sideshows and other performing arts, do get tattooed to enhance their brand. Their job is to be a “freakish” focus of attention. But nearly everyone else I’ve ever met with a tattoo has altered their body in order to feel beautiful. Yes, we sometimes get stared at in public. Yes, we get groped by strangers who think a subdermal image is somehow a tactile experience without a cover-charge. But yes, it was our choice, after all.

Of course, we aren’t like those victims who are aggressively, dangerously bullied on the Internet, tarred and feathered on social-media through “slut-shaming” or “fat-shaming” or “queer-shaming” or simply because they wore dirty sweatpants to Walmart. Nobody is yelling “World Star” in the background of a portrait-mode cell-phone video while one of us takes a vicious beating in a junior high school cafeteria (and, no, I won’t link any of these instances because I refuse to perpetuate the predicament).

In the end, no true harm was done; my girlfriend and I had a good laugh about the situation. (I can’t speak, however, for the alopecia sufferer, who I can imagine may not have been laughing.) But “Internet-shaming” is becoming endemic. Yes, exposing injustice is an admirable activity and the Internet provides a level playing field for the disenfranchised. More importantly, though, we have to realize that all of our voices are now incredibly loud—and, as a result, can do incredible social/psychological damage to another human being. The anonymous veil of the Internet can add quite a few feet to any pulpit or soapbox.

So, the next time you’re offered an opportunity to write or even read a list like this—one that gleefully extols the WORLD’S WORST WHATEVER as blatant link-bait and ad revenue—back away from the keyboard and go put on your sympathy-pants instead.

At the rate things are going, it won’t be long until you find yourself bullied on such a list.

Brian Grosz is an actor, writer and musician living in Brooklyn, N.Y. Much to his mother’s chagrin, he’s spent spent the last six years getting heavily tattooed, with over 50 percent of his body adorned in ink. Follow him on Twitter and Instagram or read about his recent backpiece tattoo. He also writes for the tattoo blog needlesandsins.com.