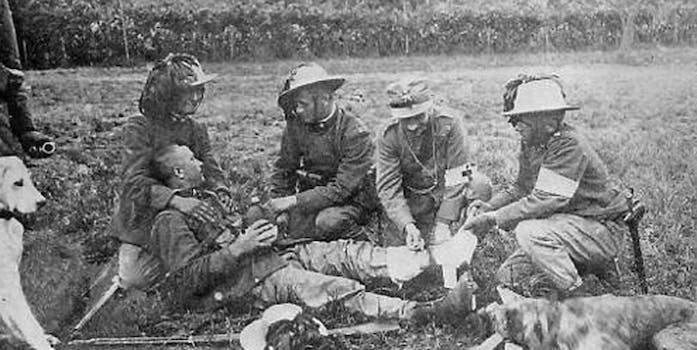 Love letters from World War I are now available online

The human cost of World War I is now accessible electronically, in epistolary form, in advance of the war’s centennial.

If you could hear, at every jolt, the blood

Come gargling from the froth-corrupted lungs,

Obscene as cancer, bitter as the cud

My friend, you would not tell with such high zest

To children ardent for some desperate glory,

The war to end all wars is now online. Specifically, the human cost of World War I is now accessible electronically, in epistolary form, in advance of the war’s centennial.

For almost a century, the U.K. government has been sitting on top of a grisly and heartbreaking trove of handwritten wills and letters home from soldiers in the world’s first global war—letters undelivered because their writers were killed while in service overseas. As property of the British War Office, they were never delivered. Many soldiers used the remainder of the paper to write letters to loved ones back home, personal notes to those they loved.

Who can tell if that was a blessing or a curse to those left behind that the letters themselves were never delivered?

Her Majesty’s Courts and Tribunals Service (HMCTS), under the British Ministry of Justice, has digitized 280,000 documents from that archive and offered them in searchable form online at Gov.UK.

Unfortunately, each scanned copy a user wishes to download costs £6 each, about $10.

These wills form only part of an archive of 41 million records currently held by the Probate Service since 1858 which are currently being digitized, according to the Justice Ministry’s statement announcing the release of the documents.

The rest of these “wills,” ranging from the Boer War to the Persian Gulf, will ultimately be released in the same way.

One of the greatest things about the Web is the democratization of information, the ability to flatten and shorten the distance between people, institutions and time. Add to that the ability to honor in the most human form, that of the individual voice, those who sacrificed (and were sacrificed) in war, as well as the insight the documents will provide historians around the world, and the Internet almost seems worthwhile.

What passing-bells for these who die as cattle?

Only the monstrous anger of the guns.

Only the stuttering rifles’ rapid rattle

Can patter out their hasty orisons.

No mockeries for them; no prayers nor bells,

Nor any voice of mourning save the choirs,—

And bugles calling for them from sad shires.