A lonely World War II hero gets the funeral he deserves

This Royal Air Force veteran died alone at age 99, but the Internet is making sure he's not forgotten.

After serving in World War II as a bomb commander in the U.K.’s Royal Air Force (RAF), Harold Jellicoe “Coe” Percival became a nomad, traveling around England with a backpack. Late in his life, Percival was found on the streets of Blackpool, England, injured and without family or close friends.

Percival died on Oct. 25 at the Alistre Lodge Nursing Home in St Annes, Lancashire. He was 99 years old.

With no one to attend the veteran’s service, funeral director Roland Whitehead and Sgt. Rick Clement called on service personnel to help give Percival a proper send-off. Their requests have been heard: Thanks to netizens on Reddit and Facebook, Percival’s funeral on Monday may be standing room only.

“My friend’s dad, the chairman of the RAF benevolent fund, is gonna sort some uniformed guys there and give him a proper send off,” wrote comedian Jason Manford on Facebook to an audience of 458,000 people. “It’s even made the local paper!”

The request for people to attend Percival’s funeral was also included in his obituary in the Lytham St. Annes Express, which was posted on Reddit’s r/pics this morning. 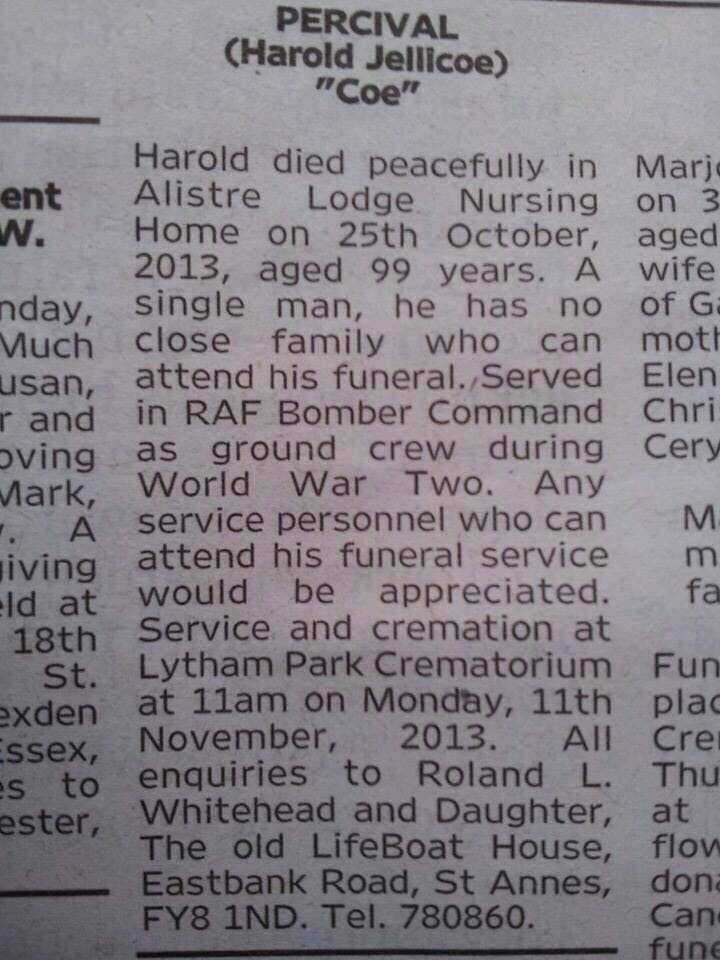 Many redditors expressed sympathy for Percival and sadness over the fact that it takes death to celebrate someone’s life.

A similar plea for funeral guests was made on r/morbidreality, where redditor dreamingtree provided some history on the RAF:

“Bomber Command sustained some of the heaviest losses in WWII,” dreamingtree wrote. “More than 55,000 men were killed, at a casualty rate of 44 percent. The command was made up of servicemen from Britain, Australia, Canada, New Zealand, Poland and other allied countries. The RAF never recognised their service, and so no medals were awarded… only last year was a memorial erected in London. Attending Harold’s funeral would ensure his service is not forgotten again.”

Update: Reddit made good on its promise Monday morning. More than 300 people attended the funeral for Percival. The following is a video someone took of the casket procession.