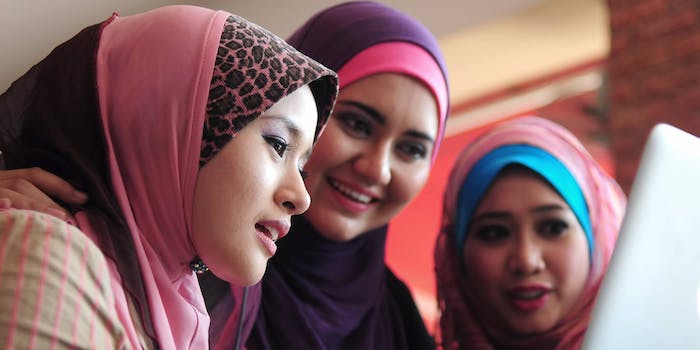 Organizers ask people around the world to wear hijab in solidarity.

Today is the fifth annual World Hijab Day, a day that celebrates a woman’s choice to wear what she wants. Founded by Nazma Khan, it “asks global citizens of all faiths to observe hijab (head covering) for a day in solidarity with Muslim women worldwide.”

And, of course, there are photos and selfies to prove it.

get you a mans who hypes you up and supports everything you stand for ❤ #worldhijabday pic.twitter.com/jJTWtaWGgc

The Daily Dot has reached out to organizers of World Hijab Day about their goals and public response and will update if and when they respond. But the day takes on new meaning in the face of an American administration that has been openly hostile to people from Muslim countries, with a ban on refugees and people immigrating from Syria, Iran, Iraq, Sudan, Libya, Somalia, and Yemen.

New York State Assemblyman David Werpin said on the WHD site, “With hate crimes against Muslim-Americans tripling in 2016, it is important we take this moment to stand together with our fellow Americans on World Hijab Day. Rooted in the American principles of religious freedom and liberty, the World Hijab Day movement seeks to end the discrimination and judgment that comes with wearing a hijab.”

In recent years, the hijab has drawn much controversy, especially by lawmakers in countries across Europe wanting to ban the head covering, citing it as a symbol of oppression. However, nearly every religion requires both men and women, in some fashion, to dress modestly. Some Christian and Jewish women also cover their heads as part of their practice, and there are Muslim women who choose not to cover their heads at all. As many point out, the ban on hijabs is often a strawman for racism and religious prejudice.

HIJAB IN ISLAM IS A CHOICE IT IS NOT OPRESSION IT IS FREEDOM OF RELIGION YALL WILL TRY ANYTHING I SWUR https://t.co/zjGI5969CF

Fighting to give women freedom also comes with accepting the choices women make with that freedom, in faith, in fashion, and elsewhere.