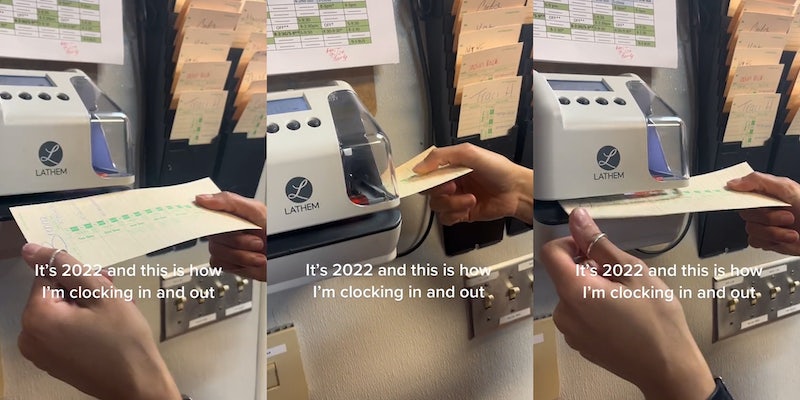 ‘That’s the way I clocked in and out in 1988’: Employee calls out workplace’s near-obsolete punch clock system

'I quit a job with no notice once bc I couldn’t figure out how to work this.'

Deep into of the age of Zoom and remote work, a video of an old-school time clock sent shockwaves across TikTok.

Viewers expressed shock that the contraption is still in use today, skyrocketing the video’s views to over 2 million.

In the original video, posted by Cadence (@cadencenicole__,) the creator shows a simple demonstration. A thin piece of paper is physically punched by the machine, marking her hours for the week.

An upstate New York jeweler, Willard Bundy, patented the first time clock in the 1890s. They exploded in usage over the 20th century, but largely fell out of use following the invention of the internet. The average worker today might have encountered one in a workplace.

Some users recognized the time clock.

But many users expressed disbelief they could still be used in 2022.

“I quit a job with no notice once bc i couldn’t figure out how to work this,” another claimed.

“As a payroll administrator I would definitely would quit if I had to manually add everyone’s hours this way,” another TikToker added.

The Daily Dot reached out to @cadencenicole__ via TikTok comment.