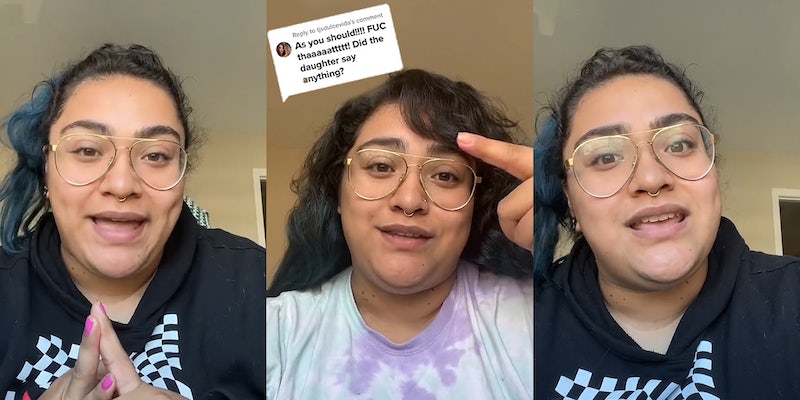 ‘Your lunch will never be worth $500’: Worker quits after boss asked her to work during her lunch break

'I will not stand for any toxic work environments not now or ever.'

A woman went viral on TikTok after delineating the circumstances that led to her quitting her job at a local air duct cleaning business. User Irian (@irian28) said that her boss interrupted her lunch break to inform her of a new work protocol and then made her answer a client call despite having food in her mouth. However, it’s the “disrespectful” manner in which she claims he spoke to her that had her label the business a “toxic” work environment and head out the door for good.

In the first clip she posted, Irian explains her decision to hand in her pink slip.

She then divulges her reason for quitting, stating that she was working for a small air duct cleaning company in Columbus, Ohio. Irian was hired to be the owner’s daughter’s assistant and while “everything was going good” for six months, Irian says it went downhill when the daughter went on vacation.

“So this past week my boss, my manager, the girl, the daughter, she was on vacation,” she says in the clip. “And I was working with her dad this whole entire week and buddy has major OCD issues. Like fucking major. And this whole week he was just making new protocols left and right telling me that I was improperly trained, that I was stupid, that he was now gonna be hands-on with the company and whatever.”

Irian says she simply followed his rules and swallowed any opinions she had since it was his company. But when the daughter returned from vacation, Irian says the incident that occurred that day during lunch was the last straw.

“Lunchtime came yesterday, and I have thirty minutes to lunch. Clocked out. So, during lunchtime, I was eating my burger and the owner, the guy that has been annoying me, came in and was telling me like, ‘I don’t give a damn about your lunch,” Irian shares.

Irian continues her story time in a follow-up video, further explaining why she quit and giving further context to the phone call situation.

“My boss’ daughter was on the phone with a client. Her dad, the owner, comes into my office, he closes the door of my office and walks in, and, mind you, when he’s walking in, I’m like taking a bite of my burger,” Irian says. “So he comes in like, ‘I don’t care about your lunch. I wanna go over this new protocol that I want you to start doing.'”

In the clip, Irian says she thought the discussion would only take a couple of seconds, but he apparently stays there for 10 minutes explaining to her this one protocol.

Irian shared her shock and disbelief. “I literally looked at my food, I looked at him and I was like, ‘I’m on lunch. I’m clocked out.’ And so he looks at me, ‘I don’t care if you’re on lunch. He’s like go ahead and answer it.’ So, I did, because I’m a dumbass,” Irian continues.

Irian says she helps out the client while still chewing her food and eventually she ends of the phone call.

Irian says she tried to process everything he was saying to her as he tells her that she must always pick up the phone, even if she’s on lunch, so he doesn’t lose out on $500.

Immediately after that interaction, Irian says she resolved to quit right then and there and packed up her things, and left.

“I gave the key to his daughter and I was like, ‘I’m not coming back, ever,'” she says.

Several other TikTokers who saw her video agreed with her decision and applauded her reaction to her former boss’ attitude towards her while she was on her lunch break. Some encouraged her to sue him. Others said that this is a prime reason why people shouldn’t eat their lunch at their desks, while some said that if she decided to pursue legal action, then her lunch won’t cost him $500, but much, much more.

“Girlll! Your lunch can now cost him THOUSANDS!” a top comment read.

“Leave the premises for lunch next job,” another advised.

“I quit my job too, I am now unemployed but extremely happy. My job was so toxic too and the expectations for employees are insane,” another viewer shared.

In a third video, Irian responded to a question from another TikTok user who asked whether the boss’ daughter she worked with attempted to contact her. According to Irian, the daughter texted her 30 minutes after she left, apologizing for any “negative circumstances that led to her leaving.”

“She just said, ‘best of luck, I hope that there’s no bad blood between you and I, once again I am so sorry and I wish you the very best in whatever your future holds,'” Irian explains.

Irian says she responded hours later and informed the daughter that she wasn’t intending on quitting, that she was just going to “swallow [her] tongue” but the lunch meeting is what ultimately influenced her decision to say goodbye. The TikToker added that there wasn’t any “bad blood between” the two of them adding that “she was fucking amazing as a boss” who was “so understanding” and that the two of them “got along.”

“Between her and I it was the chemistry that you would want between a boss and an employee. She was amazing. But her dad is just the fucking problem.”

The TikToker says that “looking back” at the conversations she had with the boss’ daughter that this probably wasn’t the first time one of her assistants quit because of her father.