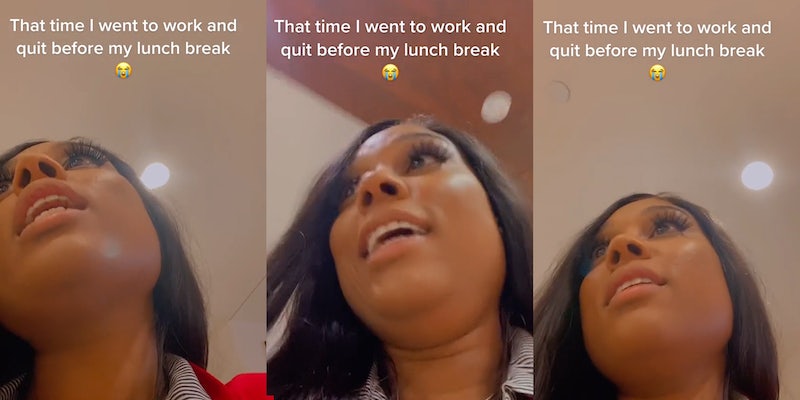 “The literal ‘quiet quit'”: Worker films self whispering that she quits first day on the job after noticing how ‘miserable’ her new co-workers looked

'The feeling of freedom when you remember you can just quit and leave.'

One woman recently took the trend of “quiet quitting” rather literally when it came to leaving her job recently.

In a video posted to TikTok, user @missesmaui15 whispers to another person “I’m quitting,” while she appears to turn in an object and then walk away.

“You’re what?” the other person asks.

In a series of follow-up videos @missesmaui15 explains it was her first day on the job. She doesn’t describe in detail the nature of the work, but it appears to be an office job. After being shown around the office, she says she was then placed at a dark desk and could see how miserable her other co-workers looked. It was then that she decided to leave, she says.

She says she eventually got up and left but forgot to turn in her parking pass. She says the moment captured in her viral video is her turning in the pass to the receptionist while quietly announcing she’s quitting.

“There [were] other employees or new hires that [were] there,” @missesmaui15 says in a follow-up video. “That’s why I whispered because [I’m] not trying to ever discourage nobody or whatever the case is.”

The definition of quiet quitting has grown to be pretty subjective, but largely it means an employee has given up the idea they have to go above and beyond at their jobs or subscribe to toxic levels of overworking themselves.

Comments on @missesmaui15 video praised the TikToker for her literal use of the term.

“This is the most calm quitting scenario ever,” another said.

Other’s applauded @missesmaui15 for speaking up for herself and leaving a job she was displeased with.

“The feeling of freedom when you remember you can just quit and leave. Like, you can literally just go if you want. It’s such a relief,” one commenter said.