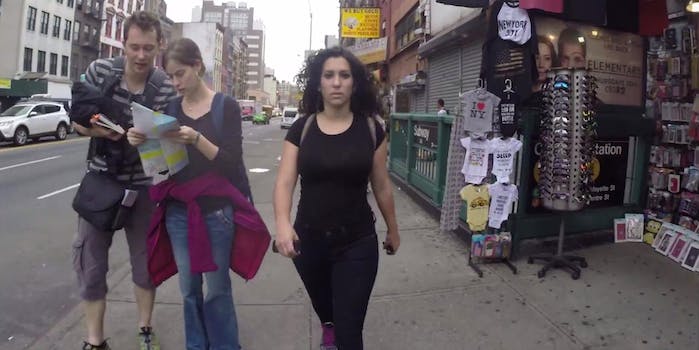 The response is about as predictable as you'd expect.

A new PSA from Rob Bliss and Hollaback exposes a close look at the catcalling and street harassment many women go through daily.

With a GoPro camera strapped to his backpack, he walked in front of Shoshana B. Roberts, who volunteered for the project, as she silently walked around New York City for 10 hours. In the process, she had more than 100 instances of verbal street harassment—not including winks and whistles—from people of all backgrounds.

The calls range from your “good mornings” and “what’s ups” to more extreme instances where a couple men continue to follow Roberts and demand a response when she doesn’t say anything. One man, after wishing her a good day, walks beside her silently for five minutes, and the discomfort and fear on her face is definitely not acting.

It’s not the first time we’ve seen what catcalling and street harassment looks like, and it certainly won’t be the last. But no matter how many times we’re presented with footage, there are still plenty who feel that some of the examples used aren’t actually harassment or that women are obligated to answer them when they’re complimented or are wished a good day, as shown by many who responded to the video on Reddit. And some of them have an issue with Hollaback trying to raise money to end street harassment.

The first step to ending street harassment? Believing someone when he or she complains about it.

Update 7:51am, Oct. 29: Shortly after Hollaback’s PSA went viral, the organization reported that Roberts had received rape threats in the YouTube comments as a result of participating in the video and urged members of the community to report the comments. Hollaback’s plan worked, and the comments are now being deleted.

“The rape threats indicate that we are hitting a nerve,” Hollaback director Emily May told Newsday. “We want to do more than just hit a nerve though, we want New Yorkers to realize—once and for all—that street harassment isn’t OK, and that as a city we refuse to tolerate it.”