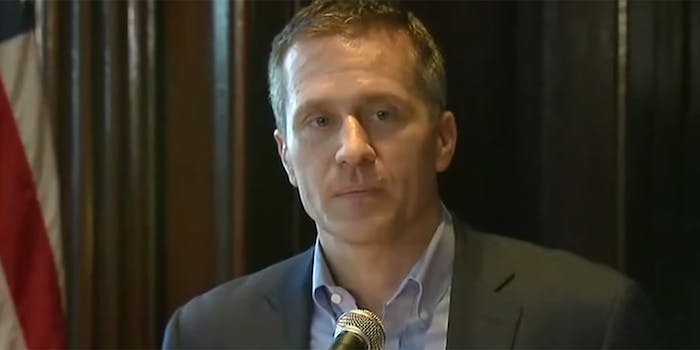 Greitens, 44, was arrested in February and charged with taking nude photos of the woman, his former hairstylist, without her consent. He has admitted to the affair but denies allegations of abuse and blackmail. Lawmakers in the House have heard testimony from multiple witnesses and found the woman’s allegations credible.

According to the report, Greitens began an affair with the woman, who was also married, after he became one of her regular clients. In her testimony, the woman said the governor behaved in aggressive, controlling, and “scary” ways.

She said during one encounter, Greitens selected clothes for her to wear and invited her to his home basement for a “sexy workout.” He then taped her hands to pull-up rings, blindfolded her, spit water into her mouth, and ripped her clothes off. He also took cell phone photos of her and threatened to make them public if she spoke out about the affair.

The woman said after she told Greitens, “I don’t want this,” he grabbed her in a “bear hug,” put her on the ground and forced her to give him oral sex as she was “bawling [her] eyes out.” She told lawmakers she felt like she “had no other choice” but to perform the sex act in order to leave his house.

The woman said she had consensual sex two other times, but during both encounters described him hitting or slapping her without consent.

“This is exactly like what’s happening with the witch hunts in Washington, D.C.,” the governor said.

Multiple lawmakers from both parties have called for Greitens to resign. He will face felony invasion of privacy charges next month.