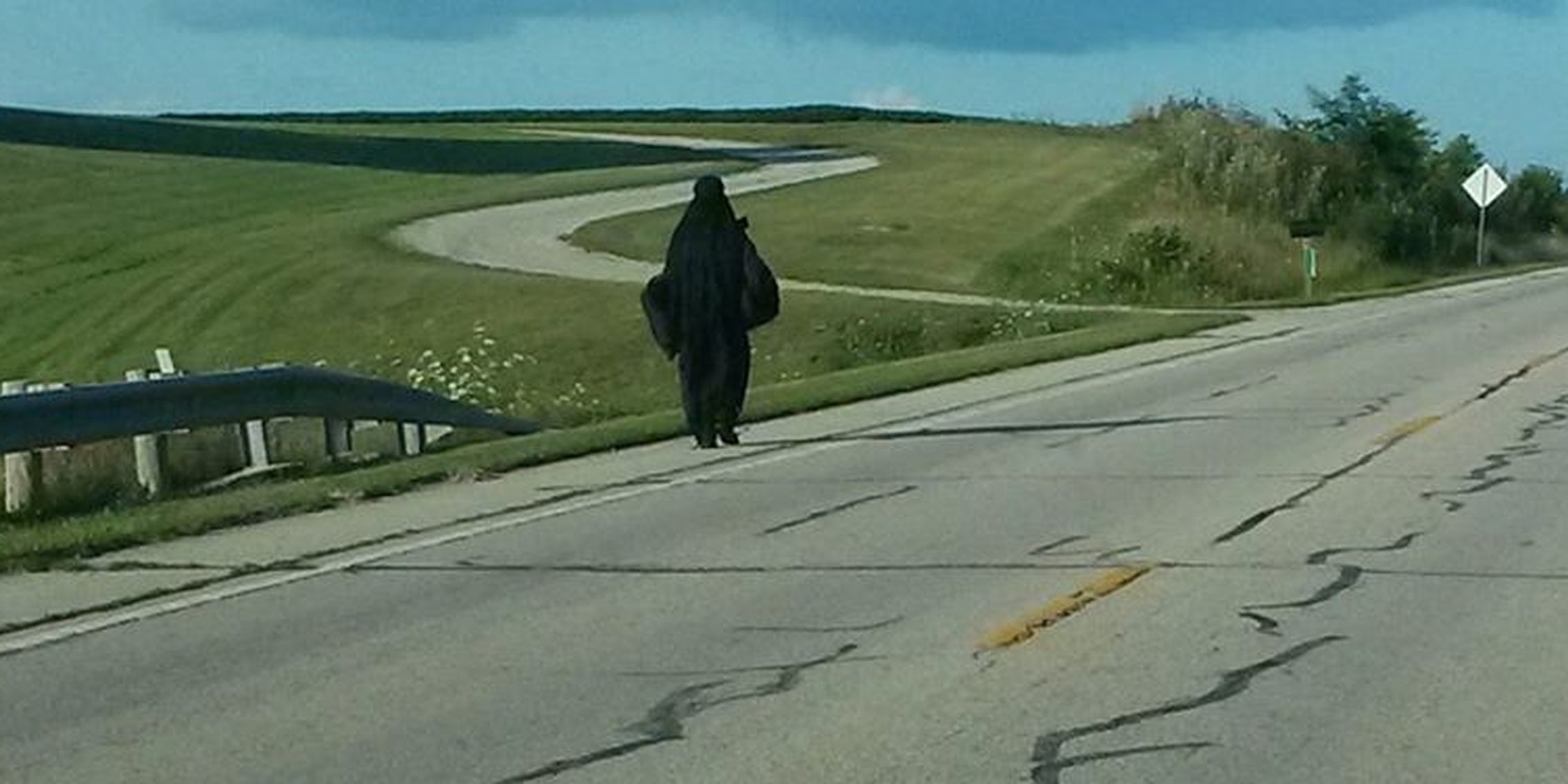 It's no ghost story, but rather a surprising figure on a strange journey, inspiring compassion and the kindness of strangers.

She moves silently and quickly through the countryside, clad all in black—but she’s no ghost or figure from a dark folktale.

Shrouded heavily in all-black clothing, a woman alleged to be an Army veteran and a bereaved mother of two has been steadily making her way north through the Appalachian U.S., drawing interest from locals and Internet onlookers all over the country.

Traveling mostly along rural highways and small towns, the #womaninblack, as she has quietly become known on the Internet over the last two months, doesn’t do a lot of talking. Sometimes she’ll accept help from strangers, but never rides. Most of the time she simply walks on. At various points along her journey she’s carried a small cart, a lawn chair, a rolling suitcase, a walking stick, or nothing at all. Bystanders who’ve noticed the woman in black on her travels have had widely different reactions to her.

“Hwy 27 tried.to talk to her but she would not talk just looked at me out of the corner of her eyes and had a half smile,” wrote Drew Thomas on July 21 on Facebook.

“[M]y daughter said the woman had a sparkle/glow around her,” wrote Len Ward after his teenage daughters encountered her in Chillicothe, OH.

I asked if maybe she had shiny things sewn on her clothes and my daughter said no. My daughter also reported a very peaceful feeling as she walked past this lady. Whatever this lady’s mission, she had an effect on my girls last night. On YouTube, a video taken in the parking lot of a Wal-Mart in Wise County, Va., shows the woman engaged in a heated debate with an onlooker about the book of Revelations. “We’ve already won,” she says simply when he insists the apocalypse is yet to come. Since it was uploaded on June 3, it has received over 170,000 views. Over 30,000 people have followed her journey thus far on Facebook since “Where is the Woman in Black?” was created on July 18. 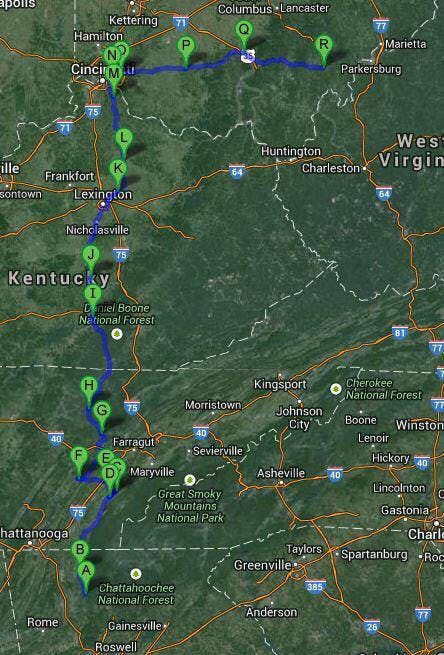 As she’s traveled, word of her approach has traveled ahead of her.

OMG The #womaninblack is in romney which means she should get here to winchester today or tomorrow. THIS IS CREEPY. 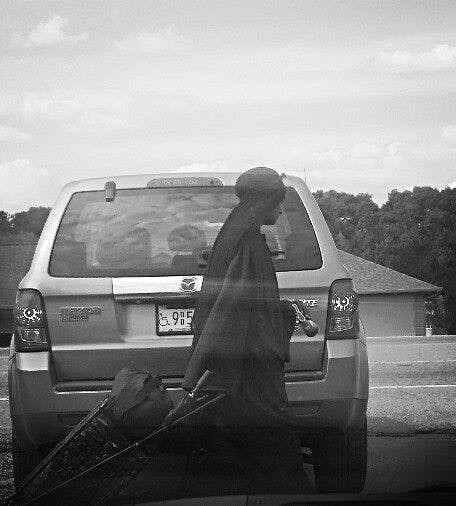 The buzz has also made her appearance something of a sideshow.

“[E]veryone was down at the end of our road (it connects to Route 50) getting pictures of her and stopping to take pictures but no one ever said anything to her at that time,” reported Cynthia Karnes in Hillsboro, OH. 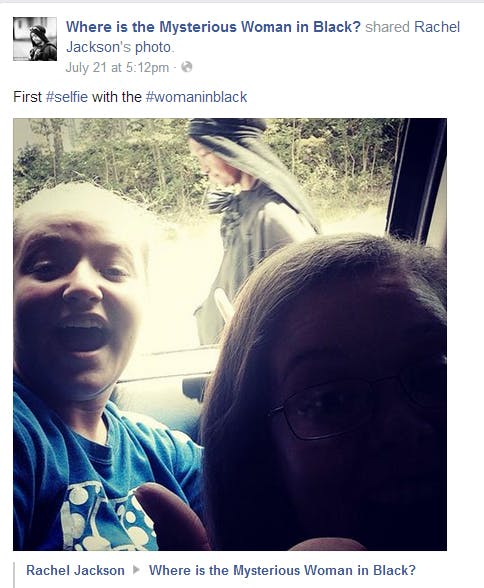 Other onlookers have wryly noted that the presence of so many spectators says more about the rest of us than it does the woman in black. Commenting to a photo album by Tod Kessinger of the woman, Facebook user April Taylor noted her walking in front of a U.S. flag and quipped, “America, where you can’t walk without being stalked and interogated.”

Still, as she’s wended her way north through Appalachia, from Tennessee, Kentucky, Ohio, then east through West Virginia and Virginia, the woman in black has brought strangers together, culling small gestures of kindness from passersby along the way. As Karnes wrote:

Chris approached her with 2 bottles of cold water, one in each hand held out together in front of him. That’s when I noticed he also had a $20 dollar bill wrapped around one bottle. The lady stopped as Chris asked “Would you please accept these bottles of water & money.” She took Chris’s hands in hers and said yes. As she took them she looked him in the eyes and said God bless… Chris said on the way back home in our car that he had butterflies in his stomach after that but had never felt better about helping someone.

State troopers in Tennessee reportedly gave the woman rides from county line to county line, aiding her travel through the state, while Ohio police reportedly asked her not to walk at night for her own safety.

She’s also united the Internet in karmic good will.

” I’m very touched and moved by this woman, wrote Lori Hopkins-Dickerson on Facebook Friday. “I haven’t been able to unglue myself from my phone [since] I found out about this story yesterday.”

I am atheist, so I won’t “pray,” but I do hope that #womaninblack finds peace in her journey. So who is she? At various times, the woman in black has claimed to be from an Islamic nation, to have worked for the Pentagon, to be on “a Bible mission,” and to simply have had her car stolen en route to her alleged destination of Winchester, Va.

The truth may be perhaps less glamorous and yet more profound. According to the Herald-News of Rhea County, Tenn, the woman allegedly told Tennessee police her name was Elizabeth Poles, a 56-year-old resident of Motts, Ala.

Poles’ brother, Raymond Poles, identified her to Reuters and stated that she was a grieving mother of two who had lost her husband in 2008 and her father in 2009.

According to her brother, Poles is an army veteran who had been receiving treatment from a veteran’s hospital to deal with the painful loss of family members when she started shaving her head and disappearing for months at a time.

Poles’ shaved head and heavy black garb could be references to Ezekiel 7:18, “They will put on sackcloth and be clothed with terror. Every face will be covered with shame, and every head will be shaved.”

He added, “I wish she would come back and let us help her.” But whatever the reason for her strange journey, and however many gawkers there are along the way, it seems the woman in black has had plenty of help as she has walked through the rural Southern U.S. Many people have referenced Hebrews 13:2 regarding their treatment of the woman—”Do not neglect to show hospitality to strangers, for thereby some have entertained angels unawares.”

As Facebook user Jennifer Naugle noted, “[T]this has brought many people together and that itself is a blessing.”