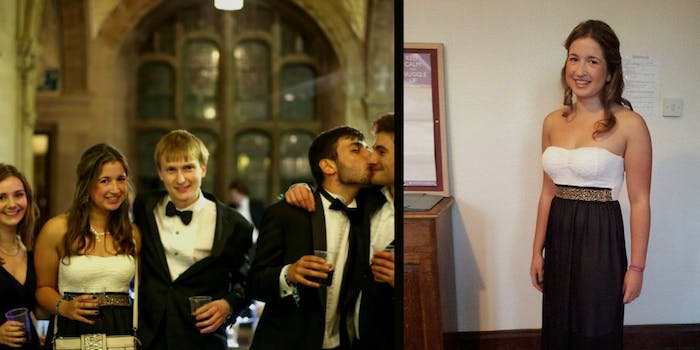 Woman gets ultimate revenge when former bully asks her out

We all secretly wish we could do this.

Like a fine wine, revenge only gets better with age. If you need proof, just ask Louisa Manning. While she’s a currently a successful student at Oxford University, things weren’t always so great for the 22-year-old.

Ten years before becoming the lovely young woman she is today, Manning was your average 12-year-old navigating her way through the awkward bodily changes of tweendom. Like many awkward 12-year-olds, she was ceaselessly tormented because of it. Classmates mocked everything from her weight to her “hairy legs” and even her “monobrow,” giving her the nickname “manbeast” and taunting her with it for the next three years. As a result, Manning developed an eating disorder and wrestled with a lack of self-confidence for most of her teenage years.

But when one of her former bullies bumped into her at a university dance and asked her on a date via Facebook shortly thereafter, Manning was anything but self-conscious. She agreed to the date, telling Buzzfeed, “My gut instinct was to say no, but then I realised what a brilliant opportunity it was, and after bouncing ideas off a friend for a few hours, we came up with an idea.”

Manning arrived at the agreed-upon restaurant early, not to prepare herself to spending an evening with one of her former tormentors, but to leave an envelope with the waitress before departing. Inside was a photo of her younger self, with a note written on the back. 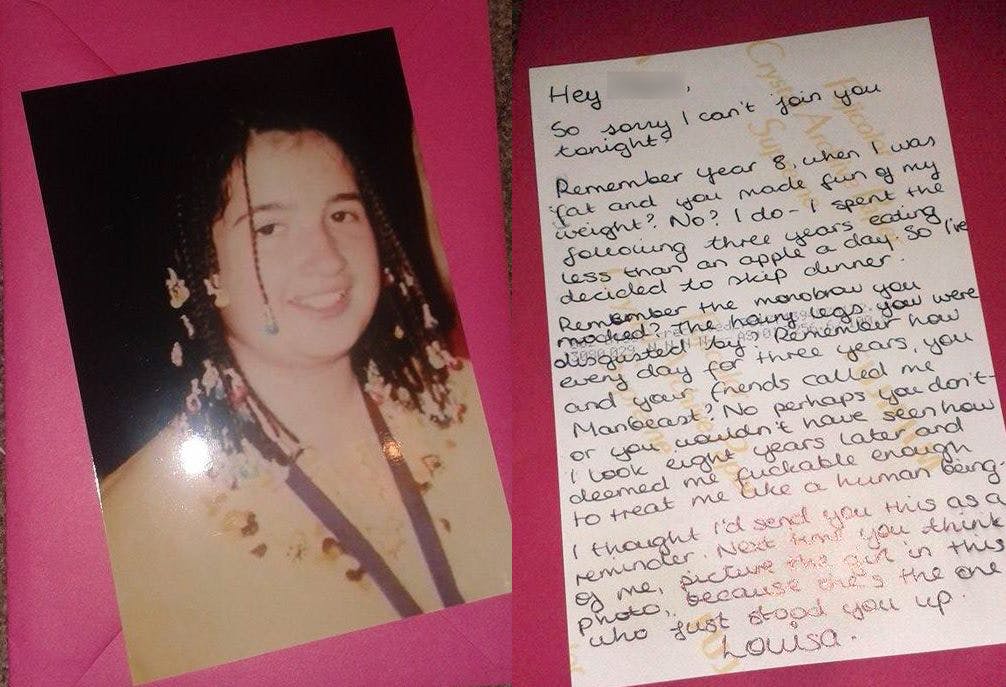 Manning posted the image to Facebook with the caption “A guy who bullied me at school then asked me out this week just got this from a waiter.” The message she wrote him reads:

Hey [name obscured],
So sorry I can’t join you tonight.
Remember year 8, when I was fat and you made fun of my weight? No? I do – I spent the following three years eating less than an apple a day. So I’ve decided to skip dinner.
Remember the monobrow you mocked? The hairy legs you were disgusted by? Remember how every day for three years, you and your friends called me Manbeast? No perhaps you don’t – or you wouldn’t have seen how I look eight years later and deemed me fuckable enough to treat me like a human being.
I thought I’d send you this as a reminder. Next time you think of me, picture that girl in this photo, because she’s the one who just stood you up.
Louisa.

After posting the image of her retribution, Manning received an apology from her former bully.

Hey… For what it’s worth, I was actually here to meet up looking for a chance to meet up looking to make friends, not because you are very good looking. I guess I had it coming though, and certainly don’t blame you for standing me up.
I can’t change who I was 8 years ago, and I won’t insult your intelligence by pretending that it didn’t happen, but I hope you believe me when I say I’m a completely different person now. I can only apologise and wish you the very best. I guess I won’t hear from you again but I mean it when I say that I hope you have every success you deserve.

Whether it was motivated by guilt, embarrassment, or true contrition, Manning said the apology came “10 years too late.”