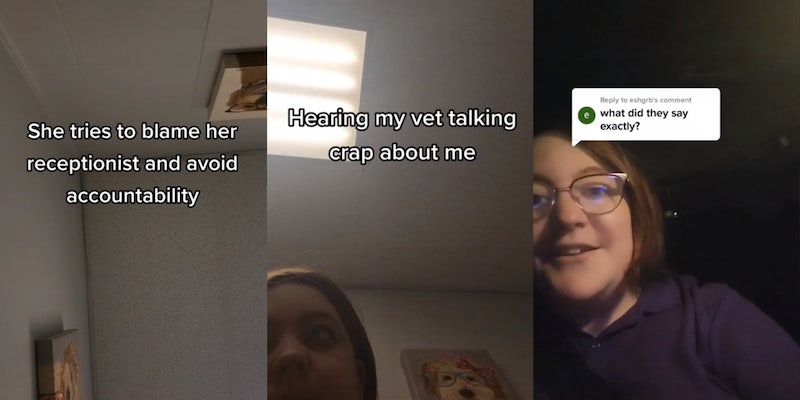 ‘It was very clearly about me and she flat out lied about it’: Woman confronts vet after she heard her ‘talking sh*t’ about her

In a viral video, TikToker Maggie Culley (@maggieculley) shared her experience overhearing a veterinarian talk “crap about her” because she was late to her appointment.

However, once confronted, the vet denied ever saying anything negative about Culley.

“Hearing my vet talk crap about me,” the overlay text reads in the video. “I never do this but I had to say something.”

In the video, in which Culley records the conversation with her phone facing the ceiling, the vet asks if Culley has any other questions or concerns.

“I just wanted to let you know your walls are very thin, and I know I was late and I was deeply embarrassed by that,” Culley replies to the vet. “It was a genuine mistake.”

The vet began speaking over her and their voices got jumbled, however, the vet claims that what she was saying pertained to the receptionist and not her. Culley write in the overlay text that the vet tried to blame her receptionist to “avoid accountability.”

“There’s a lot of things that go on here that you really don’t have an idea about,” the vet says. The two women begin talking to each other at the same time, making the conversation hard to understand.

In the comments section, users shared their reactions to the interaction.

“I would be letting that receptionist know and not go back,” one user said.

“The immediate defensiveness wowww,” another commented.

“The fact that she didn’t let you speak,” a third user said.

In an updated comment, Culley wrote that “while this was happening my dog was alerting on me because my anxiety was so high.”

In a part-two video, Culley shared more of the conversation between her and the veterinarian who continued to claim that she was not talking about the creator. She mentioned that Culley is unaware of what goes on in the clinic before she came in.

“OK well, it did sound very directed and it was just really unprofessional and made me really uncomfortable and I wanted you to know because I’m a lot more calm than a lot of people would’ve been,” she states.

In response to a user asking what exactly the problem was, Culley provided a more detailed explanation in a storytime video. Culley had apparently shown up to her usual veterinary location to receive service, having forgotten that they had transferred her to another location due to the holiday. Upon arriving at the correct location, she was told that it may take a while because she was late – which Culley says she understood.

According to Culley, while she was waiting in the exam room, the vet was complaining about young owners taking advantage of her time and made a snide comment about the fact that Culley’s dog had dyed pink ears.

“It was very clearly about me and she flat out lied about it,” Culley says in the clip.

In an update video, Culley explains that she does not want her followers leaving poor reviews on the vet’s place of business and that they are doing everything they can to make the situation right.

“This company is awesome. I’ve always had a good experience with them besides this last time,” she explains. “It’s not like she hurt my dog or anything, so that’s why I’m not super mad. I was just frustrated and wanted to share my frustration.”

The creator refused to share the name of the establishment as she does not want any hate to be directed towards them and is unsure of any legal implications, though the comments do point to it being a company in Tulsa, Oklahoma.

The Daily Dot reached out to Culley via TikTok comment.