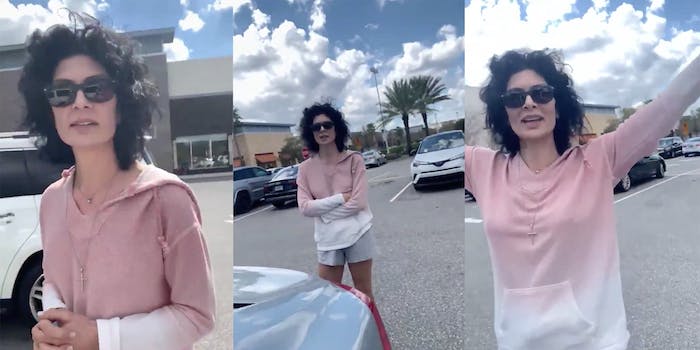 'Do you burn down buildings and kill children?'

In a viral video posted on Twitter Wednesday, an unidentified woman yells at a mother and her Black daughter—and says that “Kamala Harris is a man.”

Rita, the woman who filmed the video, said the clip was taken in the parking lot outside of Nordstrom Rack in Orlando, Florida. The video starts mid-argument between Rita and another woman, who’s not wearing a mask and is apparently blocking Rita’s car.

“Do you have anything else to say?” Rita says. “No, I don’t. Put your mask on,” the woman replies. “My mask is on, you dumb bitch,” Rita fires back. Rita then calls for help from another woman in the parking lot.

Rita and the woman blocking her car go back and forth about who’s harassing who. The woman then says, “Kamala Harris is a man. Are you a BLM or an Antifa? Do you burn down buildings and kill children?”

Rita says, “I can’t wait until this gets on Facebook.” The woman agrees and smiles at the camera.

“Does anyone know this lady?” Rita tweeted. “She said the Kamala comment to my daughter who is Black.”

When the second woman arrives on the scene, Rita asks her for help and says she’ll call the police—only for the woman approaching to pull out her phone and begin recording.

The woman is wearing a navy T-shirt that says, “Roger Stone Did Nothing Wrong!” Former President Donald Trump claimed Stone, his former advisor and longtime friend, was innocent despite being charged for witness tampering and making false statements to Congress.

Twitter users supported Rita for standing up for her daughter and shamed the woman who harrassed them on camera. “Soon as she would’ve spoke to my daughter hands, bags, keys would’ve been thrown,” one user said.

Rita later explains that she called the police after the first women attacked her and her daughter as they were leaving a store. According to Rita, both of the women who approached her in the parking lot were kicked out of the store for not wearing masks.

Rita also said that the women could be in Orlando for the Conservative Political Action Conference, which begins on Friday.

In a follow-up comment on Twitter, Rita said she was caught off-guard by the altercation and did not know how to respond.

“Thank you all for the kindness,” Rita said. “I will admit I froze up. I’ve never had someone follow me to my vehicle and behave so aggressively. A testament to white privilege.”