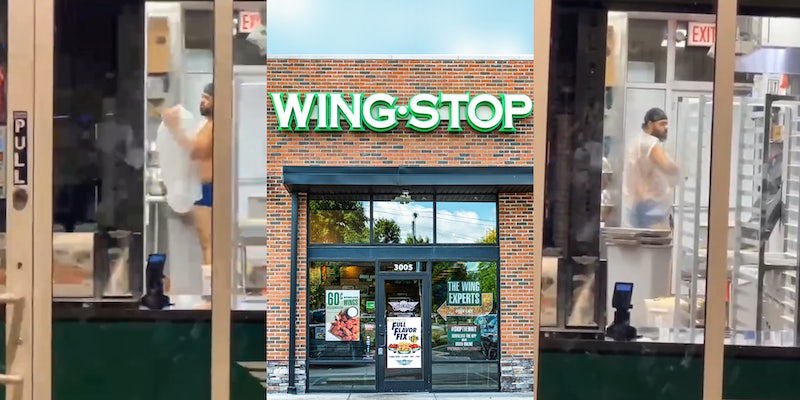 ‘What the hell?’: Wingstop worker recorded working in underwear and plastic bag after hours

A TikToker recently went viral after capturing a strange situation behind the Wingstop counter after hours.

Creator @brilz_0siris stumbles across a closed Wingstop location to find a lone employee, in a video that has amassed over 6.6 million views.

“I had to record this,” he explains, as the clip, which is filmed outside the window of a Wingstop, appears to show an employee stripped to his underwear and covering himself in a plastic bag.

“What the hell?” @brilz_0siris exclaims, “What the fuck is he doing after hours though?” he added, noting that it was after 3am.

In the comments, alleged Wingstop employees explained that this was actually a fairly normal practice and that there was a reason behind this.

“He’s cleaning and he didn’t want his only uniform the company gave him to mess up,” one wrote. “Give this man a raise.”

Another added, “They make us do that. All the restaurants do the same. You just never seen it.”

A third commenter added, “It’s wing fryer cleaning night. That grease is serious. I get it.”

However, others were more skeptical about the reasons for the Wingstop employee’s get-up.

“He’s about to go Dexter on somebody,” one commenter joked, referencing the TV series about a serial killer.

“Better question is what are you doing outside of Wingstop at 3:43am?” another asked.

The Daily Dot reached out to @brilz_0siris via TikTok comment.