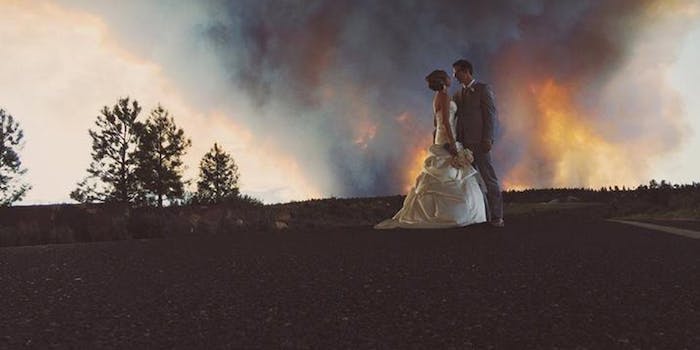 Couple uses Oregon wildfire as a backdrop for wedding photo

Smoke Gets In Your Eyes.

A wedding is always—for better or worse—a memorable occasion. But an Oregon couple that tied the knot this Saturday upped the ante with an awesome testament to their burning love.

April Hartley was about to walk down the aisle to meet fiancé Michael Wolber for a ceremony at Rock Springs Ranch when firefighters arrived on the scene and told them the area would have to be evacuated due to a wildfire raging close by. The party did move to Drake Park, but the betrothed had time to say their vows in a speedy service, after which wedding photographer Josh Newton snapped some stunning shots, one of which has since blown up on Facebook.

Even officiant Liz Leavitt was impressed by by the infernal display. “I’ve had a lot of surprises, being in ministry,” she remarked. “But I have to say: I’ve never had this happen before.”

The happy couple is now honeymooning in Cancun, which we sincerely hope isn’t due for an earthquake.