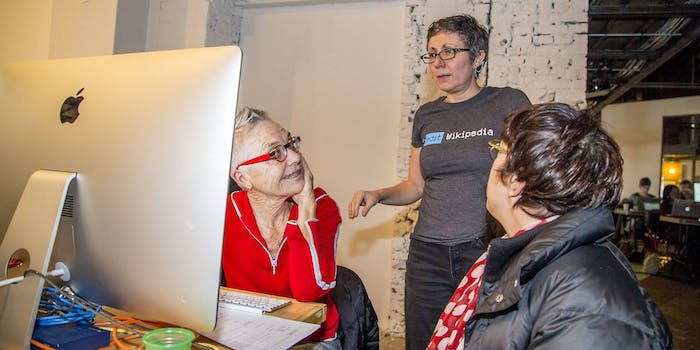 Chipping away at Wikipedia’s gender bias, one article at a time

The online knowledge-source lacks female editors, but a group of artists and feminists are trying to change the balance.

It’s never been easier to find an answer to your questions online. The Internet radically transformed the dissemination of knowledge; nothing except the invention of the printing press compares to the change in information accessibility on a global scale.

But even though we can learn more about pretty much any topic just by speaking into our iPhones or typing into a Google search bar, an old problem persists: the information that we’re getting has not, shockingly, been composed by an omniscient, objective board of super-geniuses. Even the most respected information sources have biases. That includes the dusty Britannica volumes on your dad’s shelf, and it includes Wikipedia, which is supposed to upend traditional information hierarchies by relying on a self-governing and self-selected league of editors.

Wikipedia’s gender problems have been well-documented. The site’s content is overwhelmingly curated and written by male contributors, and it shows. Notable women, and articles on the spheres of knowledge traditionally associated with women, are not represented in the digital encyclopedia’s pages with the same depth and attention paid to male and “masculine” entries.

Wikipedia and its Wikimedia Foundation have taken steps to make Wikipedia an inclusive place (Wikipedia hired activist Sarah Stierch; editors who would not acknowledge Chelsea Manning’s chosen name were banned from editing pages involving people who are trans; Wikimedia has made an internal goal to improve the gender ratio) but the problem persists.

Some pages this week are already better than they were a few days ago, thanks to the efforts of feminists huddled over computers in rooms all over the world on Feb. 1. The creators of the Art + Feminism Edit-a-Thon, an event held last Saturday in more than two dozen locations throughout the U.S., Canada, Australia, and Europe, developed a smart strategy for making Wikipedia more objective. Instead of focusing on a generic edit, the team behind the project narrowed in on the subject areas that it knows well, doing a deep dive into editing contemporary art-based pages.

The event was organized by Eyebeam, a non-profit art and technology center in Manhattan. Word spread about what the Eyebeam team planned, and what was once intended to be a small-scale affair blossomed into an event spanning continents, with satellite meetups from a hip contemporary art space in Montreal to Flinders University in Adelaide, Australia.

Michael Mandiberg, one of the event organizers, told us that this edit-a-thon is far from the first attempt to inject a better gender dynamic into the site. Mandiberg said he knew of edit events held in honor of Ada Lovelace Day, which is a day to celebrate women in science and technology, but that there hadn’t been any edit-a-thons with a deliberate focus on contemporary art. “We don’t know how many people will show up,” he told me prior to the event. “I think it’s going to be more than we expect.”

He was right: over 150 people showed up to the Eyebeam Gallery in Chelsea to participate. “At the peak moment midway through, we ran out of chairs!” Mandiberg said in an email. “At the start there was excitement in the air, along with some anxiety about the technicalities of editing Wikipedia, but after a series of 20 minute training sessions the participants got to work. A few hours in everything had gelled, and people were hard at work. It was such a good atmosphere. Many of the other locations described a similar experience.” 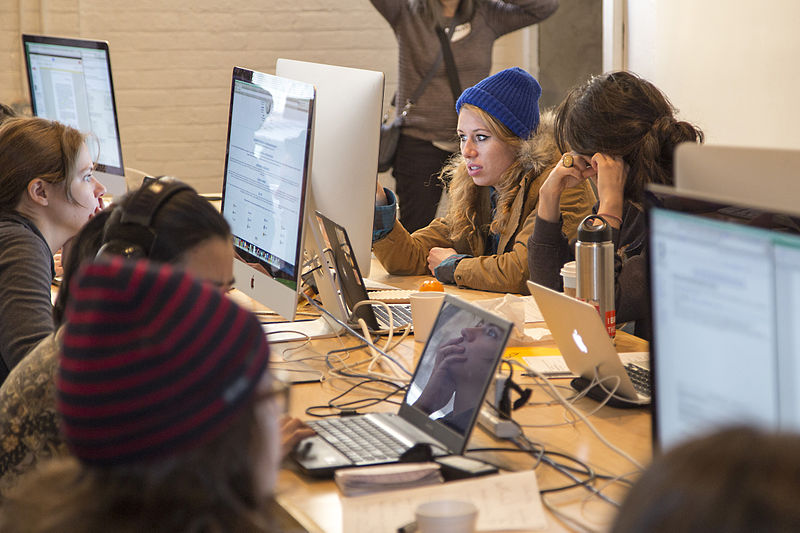 At the satellite events, volunteer numbers ranged from 6 to 60, depending on the type of venue. At the Art Institute in Chicago, around 20 people braved the snow to show up. Holly S. Dankert, a librarian at the Art Institute’s Flaxman Library, where the event was held said most of their participant had an academic background. “We had a number of faculty come,” she explained. “Six of the attendees were faculty, and two were from other institutions, which I thought was really great.” 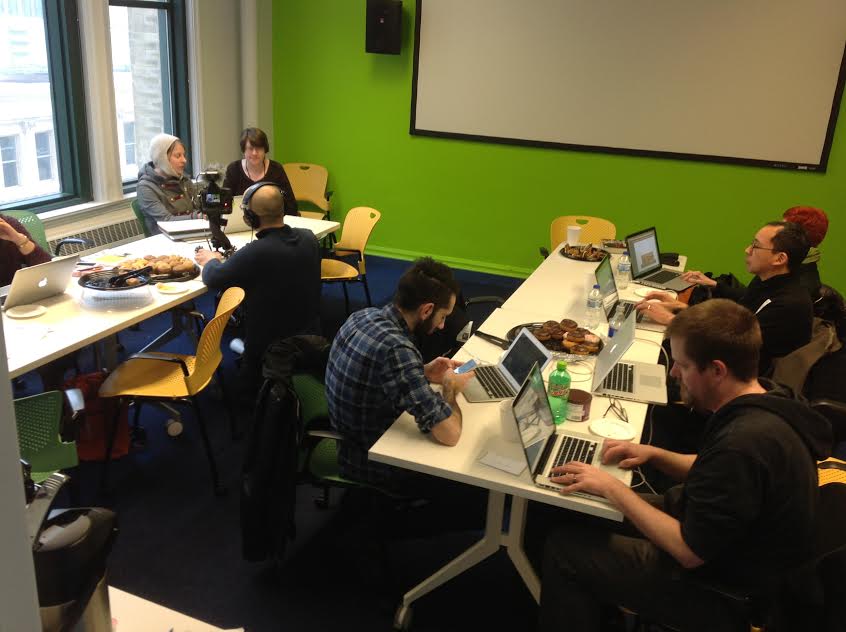 The day’s editing resulted in 80 new articles, many on overlooked female artists, as well as 13 new subjects, including, appropriately, feminist art criticism and feminist aesthetics. The teams also cleaned up 60 articles and a number of subjects—they completed the previously patchy list of Frida Kahlo’s paintings, for example. They published the full list on Wikipedia.

Here’s what one of the new articles looks like:

Some groups, like the Brooklyn Museum, hunkered down on a very specific subject (their editor volunteers sought to add biographical information to posts about women represented in an art piece by Judy Chicago).

By focusing on a specific cross section of knowledge, the Art + Feminism team attracted a new roster of Wikipedia editors with expertise in a particular field, and they gave a more concentrated, feminist perspective to one subject area—which is exactly what Wikimedia Foundation spokesperson Jay Walsh believes is the point of this type of event. “I would say efforts like this are not so much about edits as they are about new contributors,” he told Daily Dot via email. “These events are typically led by experienced Wikipedians who want to help others who have knowledge to share get involved. Not to make a few edits, but hopefully hundreds or thousands in the long term.”

“This kind of event is really inspiring because it grew and spread organically,” he said, impressed with how this particular one grew. “Edit-a-thons aren’t new on Wikipedia, but they don’t often happen at this scale. Hopefully hundreds of new contributors will keep editing because of these events.”

The Art + Feminist Edit-a-Thon is one of many ongoing projects working to make Wikipedia better, so if you’re mad you missed the boat, there may be similar events coming up. FemTechNet, an organization of feminist scholars, writers and students, has a project called “Storm Wikipedia” to motivate feminist academics to become Wikipedia contributors.

It’s only one subject and only one under-represented demographic that this specific edit-a-thon is targeting, but slowly the change will happen and their efforts will spread. Because the more minds you introduce to the Wiki-fray, the better.