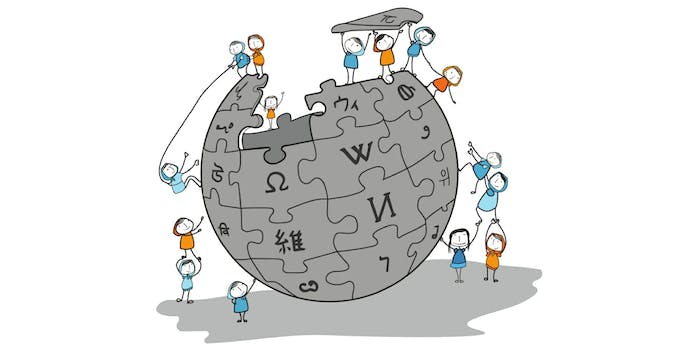 Give #Wiki4Women a hand on International Women's Day.

It’s astounding to learn later in life just how much of history is written out of what is taught in public schools across the United States. Racism and bigotry, along with societal contributions made by people of color—often women—are whitewashed from textbook pages and made footnotes in the background of other people’s accomplishments.

Online, it’s not much better. According to the United Nations Educational, Scientific and Cultural Organization (UNESCO), less than 1 in 5 of Wikipedia biographies, just 17 percent, are written about women. However, on International Women’s Day, UNESCO has partnered with the Wikimedia Foundation to change that. With the #Wiki4Women campaign, anyone help write, improve, or translate biographies for women who have gone unnoticed by the online encyclopedia.

“The #WIKI4WOMEN initiative calls everyone to take a few minutes (from 10 minutes) of their time to create, enrich or translate, in as many languages as possible, Wikipedia profiles of women committed in the fields of education, science, culture, social and human sciences, or communication and information,” UNESCO’s website states.

According to the #Wiki4Women website, getting started is relatively straightforward: First, create a Wikipedia account, use your account to sign up for the event, and then begin “assigning” yourself articles to write or edit through the event page. The project also suggests contributing members join WikiProject Women in Red, which seeks to turn red links (links that do not have a page attached to them) into “blue” or active links with pages attached. And don’t forget to register with UNESCO for a participation certificate.

If you don’t have the time to contribute, or maybe know of more women with Wikipedia than without, #Wiki4Women has several suggestions for how you can help, along with the estimated time it’ll take you to do so: Promoting the project on social media takes two minutes, whereas suggesting a person, a list of women, or a resource (such as a book or website) takes three minutes each.

According to the “course” activity for the event, so far 20 articles have been created, 50 articles have been edited, 178 editors had added themselves to the project, and more than 40,000 words have been added to Wikipedia pages about women. And in UNESCO’s Paris headquarters, more than 150 contributors, including UNESCO staff, civil representatives, and students, are working to help bridge the gap in women’s representation.

The world needs the insight of half the population.

This #InternationalWomensDay, I'm joining @UNESCO in calling for more support for women in the world of technology #WIKI4WOMEN

While female representation in executive leadership positions, entertainment, politics, and STEM fields continues to grow at a snail’s pace, it’s at least comforting that women can help contribute to the legacies of women from the past by making sure their influences are remembered in the future.