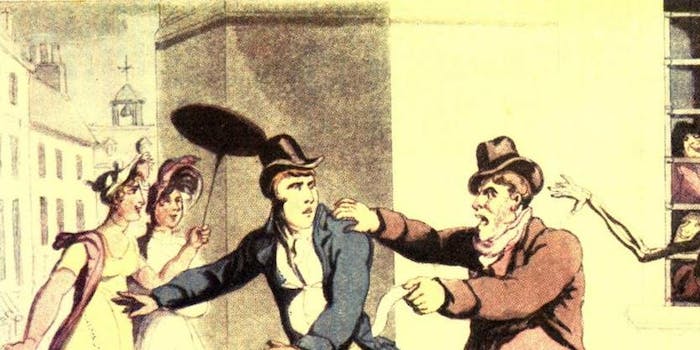 An account of jilts, cracks, night-walkers, she-friends, kind women, and others of the linnen-lifting tribe.

Did you know that in the 1960s, the purchase of sex was so rife in Birmingham, U.K., that the government considered setting up state-run brothels? Or that in 19th century Nevada, brothel madam Julia Bulette was so loved that when she died, her whole town closed down for a day of mourning? Or that Victorians used condoms made from sheep gut (and then—gross—washed and re-used them)? Post-doctoral researcher Kate Lister found these and many other facts about sex work in history so fascinating that she decided the world needed to hear about them; cue the Twitter account Whores of Yore.

U.K. academic Lister has been curating Whores of Yore since October. In that short time, it has gathered 6,000 followers, and has developed into a goldmine of fascinating historical nuggets about sex work.

Featuring vintage erotica, historical records (the 14th century arrest record of a “strumpet,” for example), and the stories of female and male sex workers across the world, the account was initially started by Lister “as a bit of fun… but it quickly felt like it was about more than that,” she wrote in an email to the Daily Dot. Initially thinking that the tweets would mostly be of interest to other academics, Lister was surprised to gain plenty of followers from the sex work community too. Lister wrote of her sex worker following, “I am learning from them all the time. They really humble me, and I love reading their comments and feedback.”

Lister noted that it was a sex worker on Twitter who alerted her to the importance of language in her tweets: “When I first started, I used language like an academic—using the word ‘prostitute’ with a kind of clinical indifference, and a wonderful woman from Australia contacted me to say, she really likes the tweets, but instead of ‘prostitute’ would I use ‘sex worker’ instead.” Other exchanges on Whores of Yore are equally enlightening:

Sex Workers in Ancient Rome were to wear flame-colored togas, in 13th century Marseilles; a striped cloak& in England, a striped hood

And some tweets simply let the pictures do the talking:

Lister said that as an academic, thorough fact-checking is essential to her, although there has been an occasional mishap:

“I once posted a fact about Edward VII keeping a bathtub full of champagne at the Bell Epoque brothel in Paris,” she said. “I accidentally posted [that]’George VII’ did this—my followers were quick to point out this was quite shocking behaviour for a two year old, and did Kate Middleton know?”

Despite some of the photos depicting nudity (as well as plenty of raunchy artwork from ancient Greece, Rome, and the Far East), the account so far seems to have stayed on the right side of Twitter’s rules on “sensitive media,” which only dictate that pornographic or violent images cannot be used in profile pictures, headers, or background images. (If tweets are reported for containing “sensitive media,” Twitter can insist that they are prefaced with a warning, which will appear to users who have unticked the “Do not inform me before showing media that may be sensitive” box in their Settings.)

Whores of Yore aims to spread knowledge about a culture that has historically been forced to exist in shadow due to social stigma and punitive laws, and to do so with both humor and humanity. “Some have felt I am exploiting, even mocking the history of sex workers; whilst I can understand why they would feel that, it’s absolutely not my intention,” she said. “I hope the account gives voice to a history. As I am learning, the history of sex work is the history of all of us.”